All Two-stroke engine options for 2023 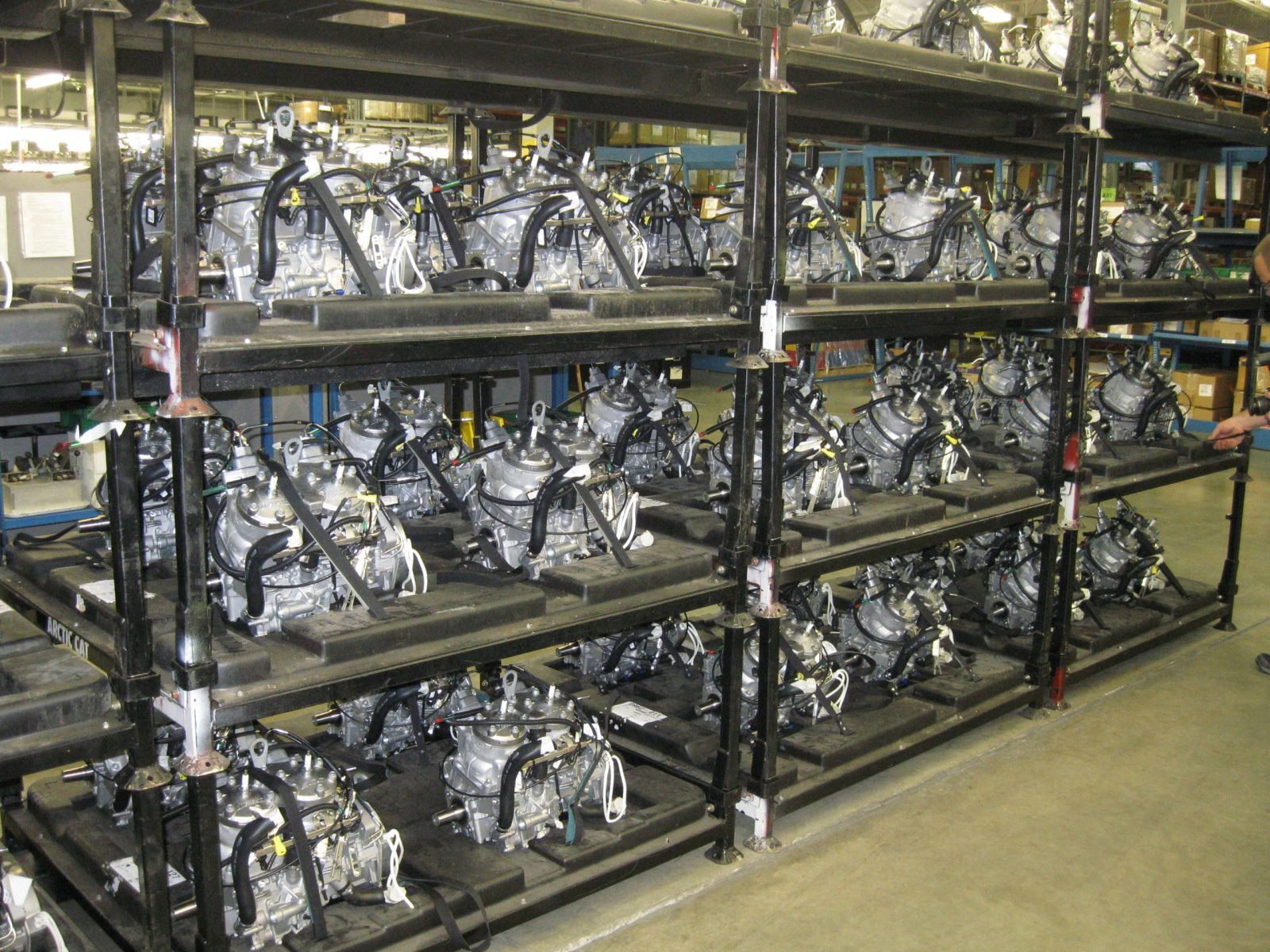 Every year, manufacturers introduce new technologies. Indeed, innovation in the snowmobile world is very present. This is especially true for engines. They present us more powerful engines, more economical, less polluting, more compact and so on.

After presenting us more powerful engines, manufacturers are now offering new entry-level engines and even engines designed for teenagers and children. It’s getting hard to keep track and the goal of this article is to show you the different engine options available from manufacturers in 2023.

The American manufacturer offers a nice variety of 2-stroke engines. These engines were designed and are manufactured by Arctic Cat at their St-Cloud plant. In fact, the manufacturer made major investments in this facility a few years ago to add a second assembly line.

This 397cc engine was introduced in the new Blast family in 2020. Arctic Cat cut its 794cc twin-cylinder engine (C-TEC2) in half, so to speak, to design this entry-level engine. The latter develops 65 hp, which seems well suited to the Blast platform, which is slightly smaller than the full-size snowmobiles.

By the way, it’s not just teenagers who have a great time riding Blast snowmobiles. Even our columnists have fallen under the spell, as Paul’s article shows (Read the article). So it’s not surprising that the manufacturer regularly introduces new Blast models.

The 4000 engine is only available in the Blast snowmobile family.

Introduced in 2014, the 6000 C-TEC2 engine is a 599cc twin-cylinder engine that makes about 125hp. It offers good performance for an engine in this class. Moreover, it is a reliable engine that has proven itself over the years.

This engine is only available in trail or hybrid models.

The 8000 C-TEC2 was introduced in 2018. It replaced the 800 engine that was manufactured by Suzuki at the time. It was greatly anticipated back then. In fact, the C-TEC2 technology was already present for 4 years with the 6000 C-TEC2 engine.

In short, it is a 794cc twin-cylinder engine that generates around 160hp. This engine has also proven to be a good and reliable performance engine.

The 800 C-TEC2 is used extensively in the Arctic Cat snowmobile fleet. It can be found in all the snowmobile families except, of course, the Blast and children’s models.

Since 2015, Polaris only offered snowmobiles powered by 2-stroke engines. Thus, the variety of engines is quite large. Moreover, for 2023, Polaris introduces a new 900cc engine to its 2-stroke engine family. All these engines are manufactured by Polaris.

The Liberty 550 engine has proven its reliability and versatility over the past 20-25 years. It is the last carbureted 2-stroke engine in the industry. It is also the last fan-cooled 2-stroke engine. This engine had a resurgence in popularity when it found itself on the Indy platform. More recently, Polaris chose it as the engine for the EVO line of snowmobiles with some modifications to limit the maximum speed of the vehicle.

In the EVO lineup, the Liberty 550 develops approximately 55 hp, while on the other full-size models, its power is around 60 hp. It is therefore offered as an engine for Polaris’ entry-level snowmobiles.

Introduced in 2021, the 650 Patriot engine is built with the same technologies as the 850, which means that it offers increased reliability, according to the manufacturer. In addition, it uses less gasoline and oil. In terms of performance, this engine impressed us and sometimes we look on the hood to make sure that it’s really 650!

As for power, it develops around 131 hp. However, one could easily believe that it has even more in the belly.

This engine is available in several models in the Polaris line and is a very good buy. For many snowmobilers, it would be an excellent alternative to the 850 Patriot depending on their real needs. Interestingly enough for 2023, the SKS 146 is making a comeback in the lineup with this engine.

Present in the Polaris lineup since 2008, the 800 Cleanfire has effectively replaced the 700 Liberty. Indeed, the 700 Liberty engine was barely present in 2009 to completely disappear the following year.

This engine develops about 154hp and was used extensively until the arrival of the 850 Patriot in 2019. Since 2021, it is only offered in the Titan line. It will likely be completely replaced soon when Polaris migrates the Titan to a new chassis.

In any case, the 800 Cleanfire will have marked the history of Polaris by announcing a new era in the early 2010s.

It’s fair to say that this engine was highly anticipated when it was introduced in the 2019 lineup . Indeed, at the time, there were many rumors circulating within the industry. Polaris did not disappoint its fans by introducing this engine. In addition to offering around 168hp of power, its responsive behavior allowed it to stand out from the competition.

Today, Polaris uses it almost everywhere in its snowmobile lineup.

The latest addition to the Polaris family of engines, the Patriot 9R makes a remarkable and, above all, unexpected entrance (Read the article). Indeed, the Patriot Boost seemed to be the engine that the manufacturer would use for all applications where the power of the 850 Patriot would not be sufficient.

This engine comes straight from the racing world, but Polaris reserves it for mountain use. In fact, it offers more punch than the 850 Patriot, but without the extra weight of about 20 lbs of the 850 Boost. The estimated power of this engine is 180hp at sea level. So, since the Patriot 9R is naturally aspirated, its power will be affected by altitude unlike the 850 Boost. However, for use below 2,000 meters, the 9R retains an almost equivalent power-to-weight ratio. It becomes a choice to consider.

This engine has been the talk of the town over the past year. In 2022, it was offered exclusively on mountain models. However, for 2023, this engine is also offered on the Indy VR1 and Switchback Assault. This is great news for trail or hybrid snowmobile enthusiasts.

The approximate power of this engine would be very close to 185hp. If this estimate is true, the 850 Patriot Boost would be the most powerful production 2-stroke engine offered in the snowmobile world. Since Polaris does not advertise the power of its engines, we must rely on the average of third-party figures.

All 2-stroke engines in the Ski-Doo fleet are manufactured by Rotax. The engines offered cover the needs of all types of snowmobilers. In fact, the uninitiated can get 40 hp snowmobiles while those looking for high performance can opt for engines that can reach 180 hp. Of course, there are other options in between these two extremes.

In its 2023 snowmobile lineup, Ski-Doo has thought about people who want to start snowmobiling. Thus, the manufacturer introduces the NEO and NEO+ snowmobiles (Read the article). These vehicles are powered by adapted versions of the famous 600EFI engine launched in 2021. Thus, the NEO snowmobiles have 40hp while the NEO+ have 55hp. Please note that these configurations cannot be modified to increase the power, as can be done with Polaris’ EVO.

The NEO/NEO+ are available in two models, the MXZ and the Summit. These snowmobiles are also “full size” which differentiates them from the EVO, the Blast from Arctic Cat or the Venom from Yamaha.

Of course, it will be interesting to see how the NEO snowmobile offer will evolve over the next few years.

For 2021, Ski-Doo has made a big sweep of its entry-level two-stroke engine offering. In fact, it has replaced all of its carbureted engines with the new 600 EFI. With 85hp, this engine is more economical, more powerful and cleaner than the ones it replaced. Plus, it meets EPA standards. The beauty of it is that Ski-Doo offered the 600 EFI models at the same price as the corresponding carburetor models.

Today, this engine is found in the “Sport” package of the entire Ski-Doo snowmobile line.

Launched in 2009, the 600 H.O. E-TEC marked a turning point for Ski-Doo. It was the industry’s first direct injection engine. This technology allowed the manufacturer to offer cleaner, more efficient, more economical, and most importantly, more reliable engines.

In January 2018, Ski-Doo announced the 2018 Ski-Doo MXZ 600R E-TEC. This model was powered by the second generation of the 600 E-TEC, the 600R E-TEC. This is the engine that will be in the Ski-Doo lineup in 2023. This second version of the engine provides 5 more hp, while improving its performance. It develops 125-126 hp. It can be found in almost all of the manufacturer’s model families.

Over the years, the 850 has completely replaced the 800 E-TEC in the range. In addition to the 10 extra hp it provides, the 850 E-TEC offers better acceleration and recovery performance. It’s also more reliable in the long run.

In 2020, Ski-Doo introduced the industry’s first turbocharged 2-stroke engine. Available only in mountain snowmobiles, this engine produces 165hp of power up to an altitude of 8000 feet. For mountain snowmobilers, this is a game-changer.

In 2023, Ski-Doo improves this engine by allowing it to generate no less than 15 additional hp (Read the article). Moreover, the 180hp are available up to 8000 feet of altitude.

However, unlike Polaris, this turbocharged two-stroke engine will not be available in trail or hybrid models. Only certain mountain snowmobiles will be equipped with it.

On the other hand, it would not be surprising to see this engine offered in trail or hybrid models in the next few years.

Considering the late launch of the 2023 models, this article will focus on the 2022 Yamaha offering. This means that there could be new or retired engines for the next batch.

In 2020, Yamaha introduced a 397cc single-cylinder 2-stroke engine. This engine is used in the new Venom snowmobile family. This engine develops 65 hp of power. This new line of snowmobiles aims to allow people to get into the sport without having to drive a snowmobile that could be intimidating for them.

Although Yamaha was targeting a teenage or young adult clientele, these snowmobiles are fun to ride for even the most experienced snowmobiler.

The number of models offered has increased to make them accessible to a wider range of riders.

Present in the Yamaha lineup since the 1980s, the 535cc engine is a sure bet. This engine received a major update when it returned to America in 2017. It develops approximately 70 hp.

In 2021, this engine replaced the Arctic Cat 600cc engine that had been available in the Transporter since 2020. In addition, Yamaha introduced it in the Mountain Max marking the manufacturer’s return to the world of mountain sleds. This 160hp engine provides good performance for both mountain and utility snowmobiles.