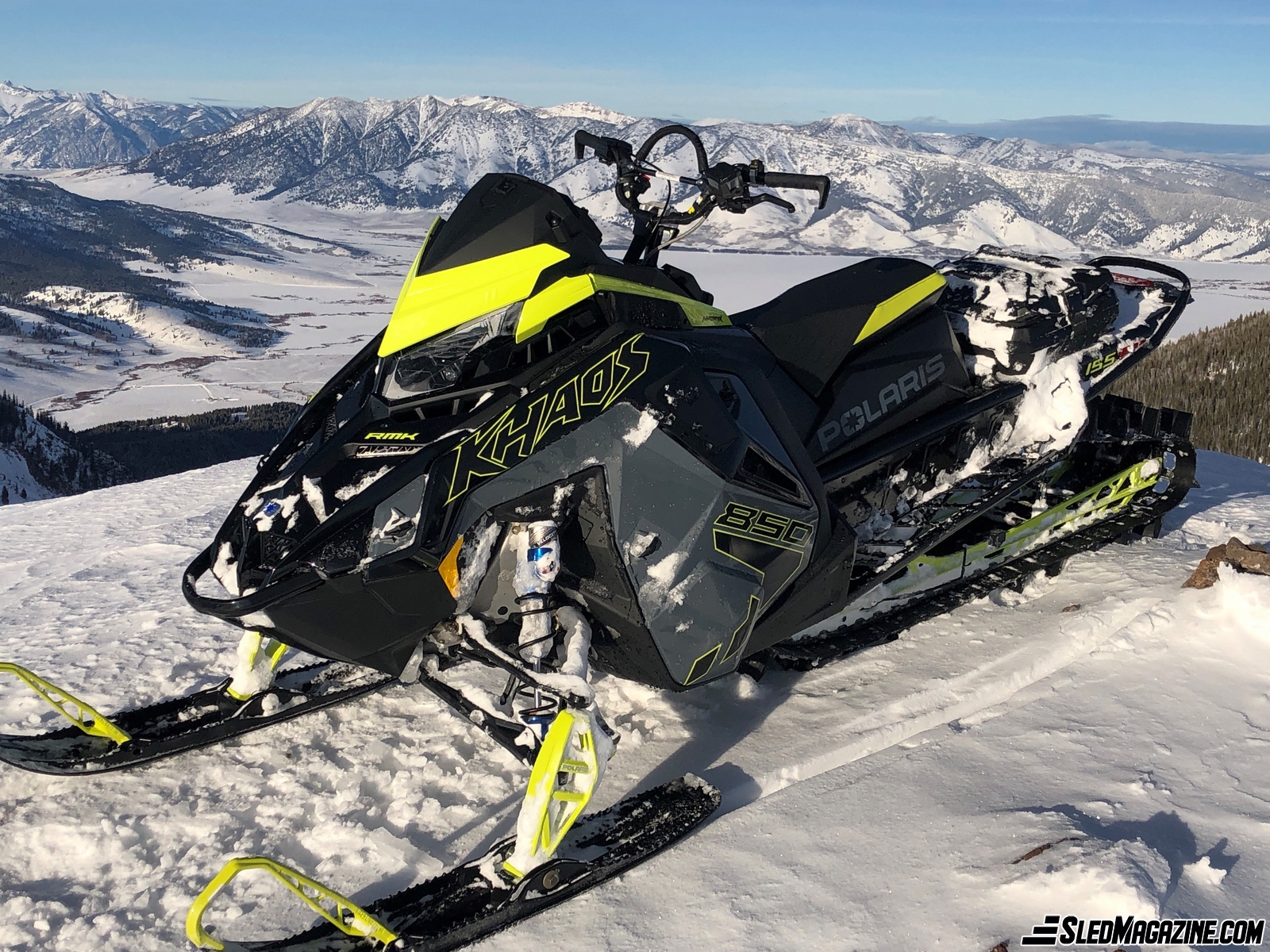 Last season I was fortunate to be able to spend the whole season on a 2022 Polaris Matryx 850 Khaos Slash 155.  It was great to have so much time to test a sled with so many new upgraded design features.  It was the first year for Polaris’s Matryx chassis, so that alone is a big change not to mention all the other upgrades Polaris brought with the Matryx.  Let’s dive in and take a closer look at some of the new modifications that Polaris brought in the mountain segment for the model year 2022. 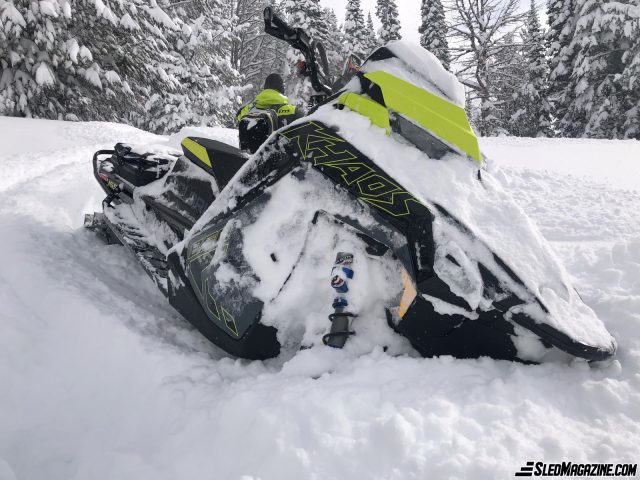 Polaris Matryx Chassis…So Many Great Modifications from the Axys

The Matryx chassis brought a bunch of new and upgraded features with the new package, but fortunately, Polaris enhanced many of the parts from the beloved Axys chassis.  So, the Matryx shares many components with the Axys but the parts that are different are in my opinion, better.

For the model year, 2022 Polaris made a factory tether standard on the Matryx.  This is great because riding in the mountains without a tether is less than ideal and a bit of a risk.  So, most people were needing to purchase and install an aftermarket tether on their sleds in the past.  Now, it’s a standard feature and it works great.

The Matryx comes with a big storage area behind the 7s display that’s convenient and collects heat off the motor so items in there stay warm.  It’s a great spot to thaw a set of iced-up goggles or keep your beanie or extra gloves warm.

Another new feature is the adjustable or removable toe loops, so you have 3 three customizable height options, or you can remove them altogether if you don’t want them on at all.

One of my personal favourite upgrades for the Matryx is the new seat.  The Matryx seat is lighter weight, lower and narrower, very similar to the aftermarket seats many riders used to buy.  The new seat is approximate ¾” lower and 3” narrower than the previous stock seat.  This is huge for a mountain rider because we’re always hopping over or shifting our weight across the seat to better position ourselves for the terrain.  With the Matryx and the new seat design, you do lose the under-the-seat storage area, but the loss in storage is well worth the compromise. 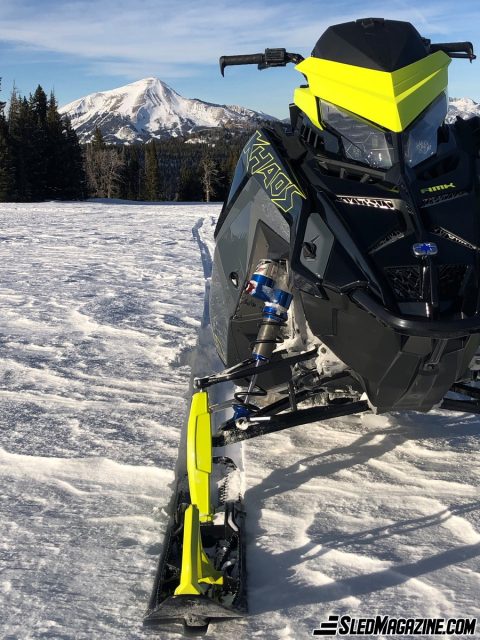 Ok, so the Matryx is slightly heavier than a comparable Axys with a couple of parts, but here’s why.  There are three upgraded items on the Matryx that add weight.  The 7s display, LED headlight system and a small battery to run the display, all slightly add weight.  All the weight added is somewhere in the 5 lbs area and in my opinion wasn’t noticeable on the snow at all.   There is a new LED headlight system and battery to power the 7s display when the machine is off are all absolutely worth the slight weight penalty.  I’m kind of a big eater, so the lunch, snacks, and water I bring for the day probably add up to more weight. 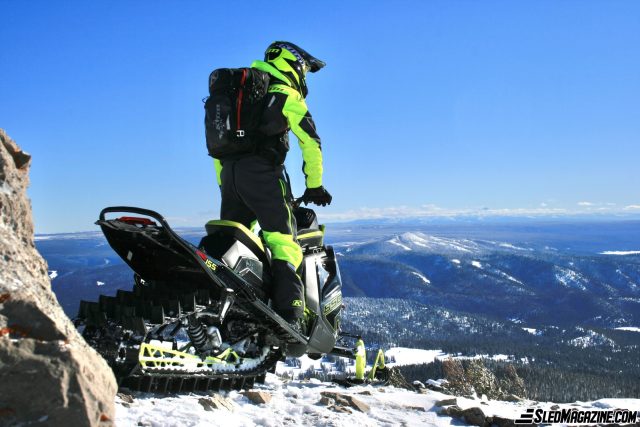 The Slash tunnel and Centralized Cooling System are two huge modifications and upgrades to this sled.  The Slash tunnel being approximately 7” shorter for the 155 lengthen tapered on the end makes flipping the sled so much easier.  Now, no extra tunnel and bumper are hanging off the back of the sled acting like a wheelie bar creating resistance and making it more difficult to flip the sled around.  The shorter and tapered tunnel allows the snow to exit the back of the sled easily.  As you start to bring the sled around in a hop-over, bowtie or re-entry, the shorter and tapered tunnel drastically helps reduce drag, making it much easier to complete the maneuver.

The Centralized Cooling system now routes the coolant just behind the seat, not to the back of the tunnel.  This reduces weight by having less coolant in the system, so less fluid equals less weight, but the big weight reduction comes with the lack of snow and ice accumulation.  The snow and ice reduction due to the Centralized Cooling system was impressive.  Now, that the warm coolant isn’t circulating the back of the tunnel, the snow and ice don’t build up nearly as much.  It’s hard to put a number on the weight savings this system reduces but I would bet it’s a lot more than a person would think. Wet slushy snow and ice are dense and heavy and when you don’t pack the tunnel with it, the weight savings should be substantial.

For most of the season on the trail, the average temperature with scratchers down ran between 115F (46C) and 130F (54C) and the off-trail temperature usually ran around 99F (37C).  During the late-season freeze-thaw with hard pack and frozen trail conditions, the temps were slightly higher for this sled than some of the other sleds I was riding with, but the sled never got hot enough to go into limp mode.  The late-season trail conditions are always a challenge for mountain sleds, so this isn’t a surprise.  As mountain riders, we always play the game of, watching the sled temperature and seeing how far down the trail we can go before we have to dip off and cool the sled down.  Fortunately, it’s only for the trail ride in.  Once we get off the trail, the sleds are usually good to go, which matters to us. 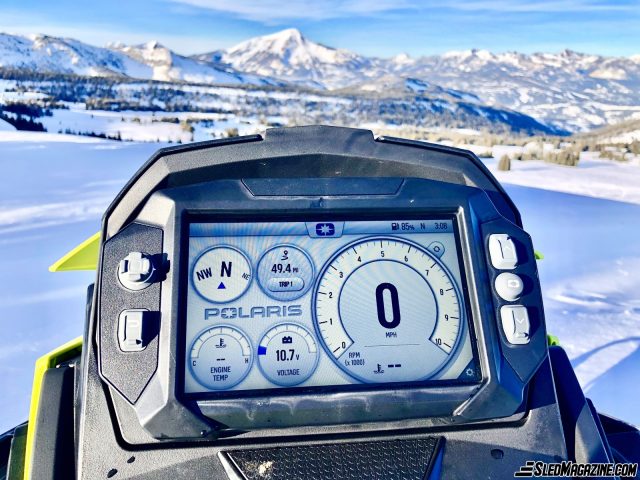 The 7s display with ride command technology was a fantastic gauge that was easy to see and use.  As I kept riding and trying different features of the gauge throughout the season, it kept surprising and impressing me.  It’s extremely user-friendly and customizable.  In the setting, you can pick what items you want to see on the gauge, such as engine temp, RPM, voltage, etc., and orientate them where you want to see them on the screen.  As you ride, the screen can be navigated with your gloves on by using the buttons on the side of the screen or you can use the touch screen function when you’re stopped and have your gloves off.

The 7s display has Polaris’s group ride technology so you can link other Polaris riders with the 7s display and see them and their location to you on a topographical map as you ride.  Text messages can be sent to other riders via the 7s display. Those messages will come over the screen as they ride.  You can run tracks or drop waypoints as you ride, which will be stored in the gauge and can be used for reference on future rides or shared with friends.  The 7s also can receive trail maps and software updates via Bluetooth.  The 7s gauge was impressive and user-friendly, I loved and used so many of its features I wouldn’t buy a new Polaris without it. 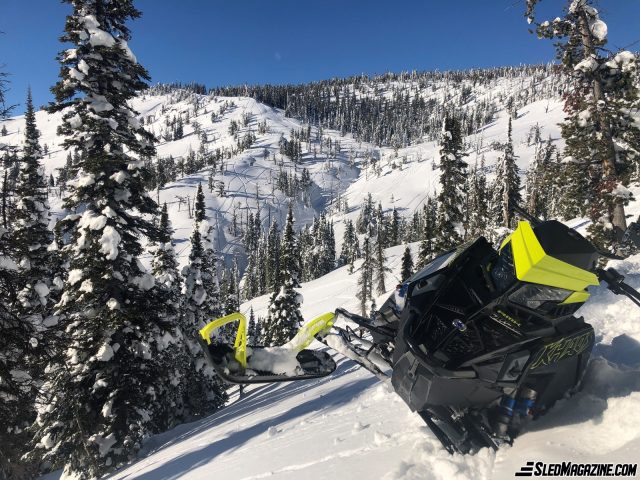 While testing the Matryx Khaos last season I also tried out the Series 7 3-inch track.  The series 7 3” isn’t Polaris’s newest track design but it is their deepest lug option.  While riding this season I was able to test the 3” track in all the different snow depths and types.  The 3” track excelled in the really deep powder days, providing a ton of propulsion and lift to the sled.  But it also had a great grip on the firmer snowpack and provided better traction than I had anticipated.

The series 7 track also has full-length rods through the track to provide exceptional sidehill bite for traction.  With the bite and traction of the track, it also is very predictable and controllable, inspiring the rider to push the limits and try harder lines.  The track is also tough.  I put on about 1200 miles of tough log-hopping backcountry miles with no damage to the track.  That’s a testament to the track’s durability, not that I was easy on it.

Inspecting the track after the season there are no missing lugs, cracks in the rubber or any visible damage.  Overall, I was extremely happy with the series 7 3” track, it exceeded my expectations in all the major categories, had great traction and lift, was very predictable and controllable to an inspiring level and extremely durable. It took all the off-trail riding abuse a mountain rider puts a track through with ease.

With that said, the hand warmers kept up in colder trail riding conditions better than some of the competitor’s sleds I’ve tried.  So, they work well, just a little more adjustability would be great.  The trail models with the 7s display have more customizable hand and thumb warmers with the 7s display, so I think it’s only a matter of time before some version of that makes it over to the mountain sled models. 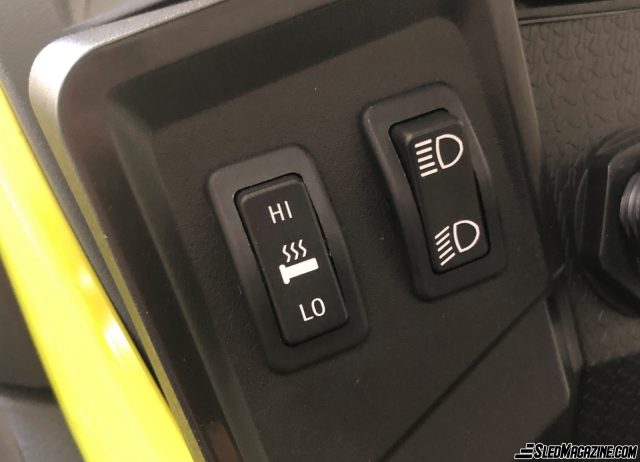 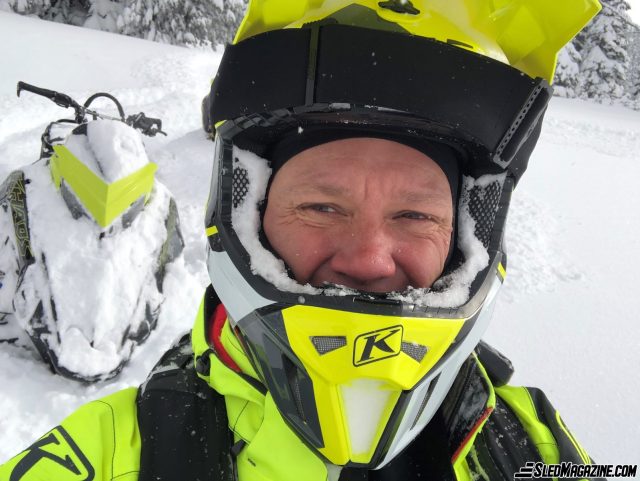 Last season the 2022 Polaris Matryx 850 Khaos Slash in a 155 was an absolute blast in the mountains.  The upgraded features and parts that Polaris brought with the Matryx were all a step in the right direction and enhanced this machine to make it handle, perform and look better than the previous Axys.  It handled all the different snow conditions well and put a smile on my face every day I rode it.  I was confident I would like it even before I rode it because Polaris has a great team of engineers and they always put out a good product.

Although, what I wasn’t expecting was how much I would love the new Martyx chassis in the Khaos package. Also, all the amazing upgrades Polaris made with them. If you’re in the market for an extremely fun, playful, and agile mountain slayer, take a hard look at the 2022 Polaris 850 Matryx Khaos Slash in 155 lengths.

You won’t be disappointed. 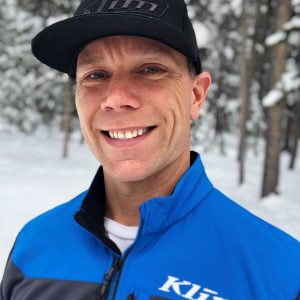 Jim’s passion for snowmobiling started at a young age, riding countless laps around his grandma’s house on his uncle's Arctic Cat. At the age of 14, he got his first job, strictly for the purpose of buying his first snowmobile. His passion for sledding has grown over the years and led him to base his career on it. Today, Jim’s a Backcountry Snowmobile Ranger for Custer Gallatin National Forest. He resides in West Yellowstone, Montana which some say is the snowmobile capital of the world. He loves to ride but is also passionate about helping other snowmobilers learn and develop avalanche skills so they can safely ride in avalanche terrain. As an avalanche instructor, he teaches both snowmobile guides and casual riders - all snowmobilers are welcome. Jim is also a backcountry snowmobile guide for a West Yellowstone dealership, helps with Search & Rescues and gets out sledding with friends as often as possible. When you consider his riding begins in November and goes into April, you can imagine how many days he spends on a sled. Jim feels fortunate to have the ability to support his sledding passion with his career and his affiliations in the snowmobiling community. There is no doubt one could say with certainty that Jim is a full-blown snowmobile enthusiast.
Toutes les publications
PrevPrécédentewool Pro Jacket
SuivantHow to keep your feet from getting cold on a snowmobileNext
Gérer le consentement aux témoins
Pour offrir les meilleures expériences, nous utilisons des technologies telles que les témoins pour stocker et/ou accéder aux informations des appareils. Le fait de consentir à ces technologies nous permettra de traiter des données telles que le comportement de navigation ou les ID uniques sur ce site. Le fait de ne pas consentir ou de retirer son consentement peut avoir un effet négatif sur certaines caractéristiques et fonctions.
Manage options Manage services Manage vendors Read more about these purposes
Voir les préférences
{title} {title} {title}