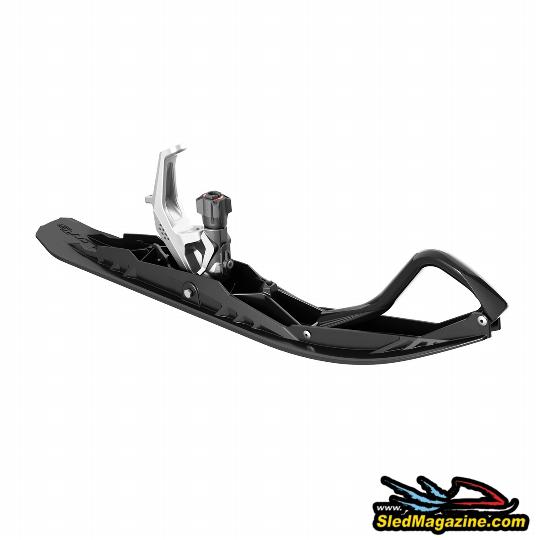 Once again this year, Ski-Doo innovates with the introduction of many major novelties and improvements in their snowmobile lineup. And this, to offer the best snowmobiling experience ever.

The 2016 most remarkable novelty will be without doubt the new adjustable Pilot TS ski. This ski is not only new, it is really revolutionary. With a small wheel located near the leg of the ski, snowmobiler can adjust the height of the carbide runner according to trail conditions and required bite.

For example, when the snowmobiler wants more bite in aggressive riding, he will be able to lower the height of the runner. For a smoother ride, the runner will be pulled up a little. This ski offers another very interesting advantage, mostly when snow conditions change during the day. 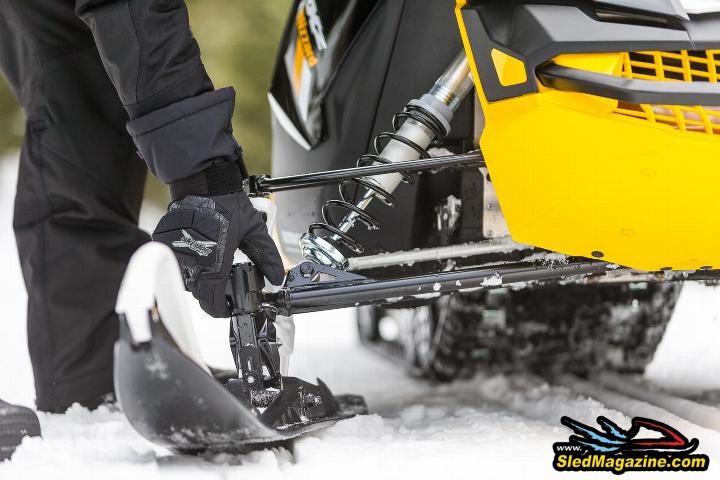 Adjusting the Pilot TS ski is very easy. Only 10 wheel rotations and the height of the runner changes by 12,5 mm (0.5 in.). An indicator located in front of the button shows clearly the height of the blade among the 20 settings available. The runner is carbonitrided for an extended longevity. 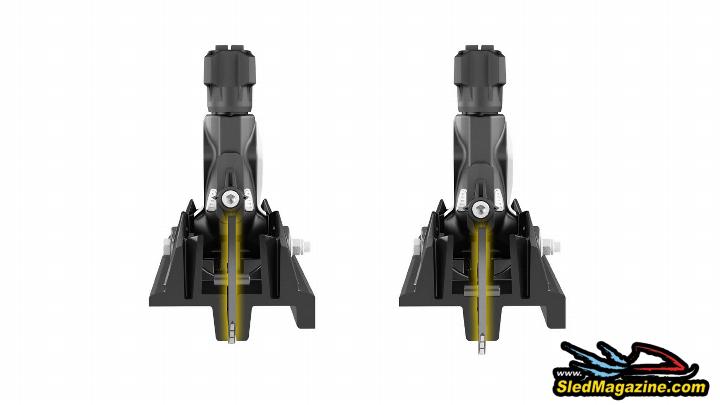 The Pilot TS ski will be a standard feature for the MXZ XR-S, MXZ Blizzard, Renegade Enduro and Grand Touring SE models. It will be an optional feature and included in the rMotion quick-adjust package for some MXZ and Renegade models.

Another innovation eagerly awaited by snowmobilers is the new rMotion rear suspension available in 328 cm / 129 in. edition. This new length of track is truly uncompromising. It offers more traction, more comfort in bumps and better braking without real impact on the handling. 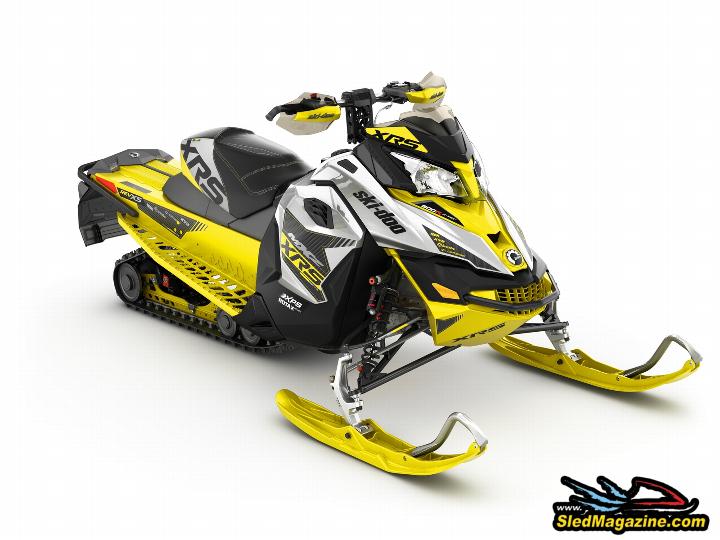 This version will be a standard feature on the  MXZ X-RS, MXZ X and MXZ Blizzard 2016 models. Combined with the new Pilot TS skis, the 328 cm / 129 in. version will make mighty trail snowmobiles of these MXZ models.

The Renegade Enduro makes quite an entrance in the crossover on- and off-trail category. Inspired from robust expedition motorcycles and SUV, this new model is designed for touring as well as for tough trails, and for off-trail adventures. 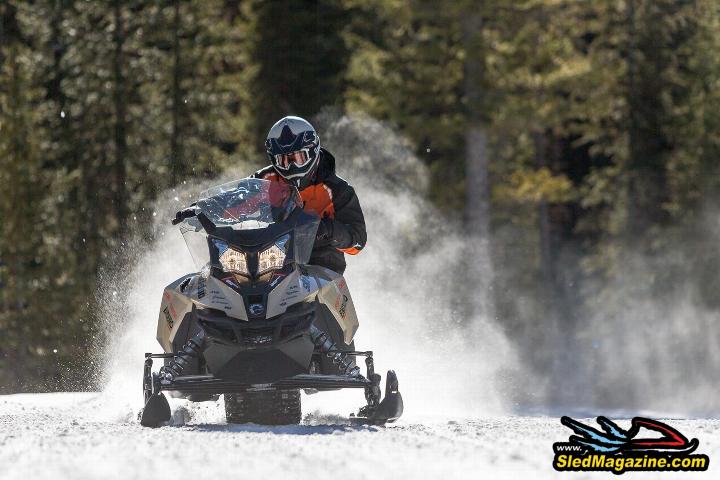 Its standard features include XC front bumper, new adjustable Pilot TS skis and the Air Ride (ACS) rMotion suspension. The Renegade Enduro is equipped with a 348 cm / 137 in. Ice Ripper XT track. Four choices of engine are offered on this model, the 800 E-TEC, 600 H.O. E-TEC, the 1200 4-TEC and the 900 ACE.

In the trail high performance category, the MXZ Blizzard makes its comeback since 2007 with characteristics that are worthy of the legendary race. 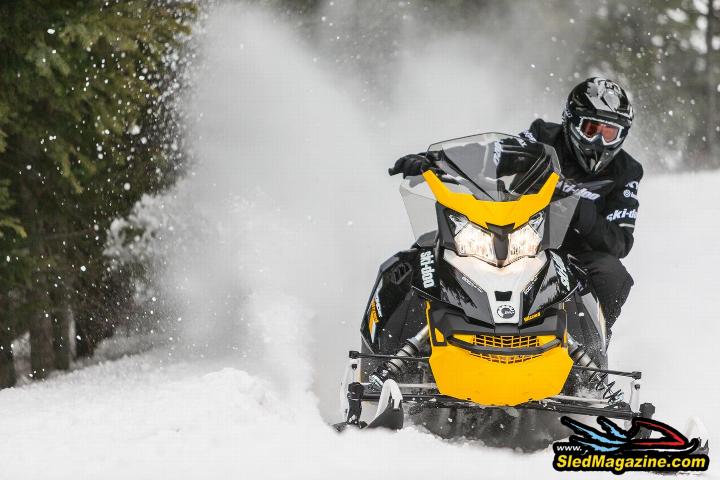 At first sight, this snowmobile is a winner. Built on the REV-XS chassis, its standard equipment includes new Pilot TS skis and rMotion 129 rear suspension. For optimal traction and control, the MXZ Blizzard is equipped with the Ice Ripper track of 32 mm / 1.25 in. lugs. Four choices of engine are offered on this model, the 800 E-TEC, 600 H.O. E-TEC, the 1200 4-TEC and the 900 ACE. Choice of color is also inspired from race legends of the 70s.

The Summit Burton is introduced in the mountain riding category. Inspired from the Summit SP, this new model comes from the collaboration between Burton, snowboard industry leader, and Ski-Doo. 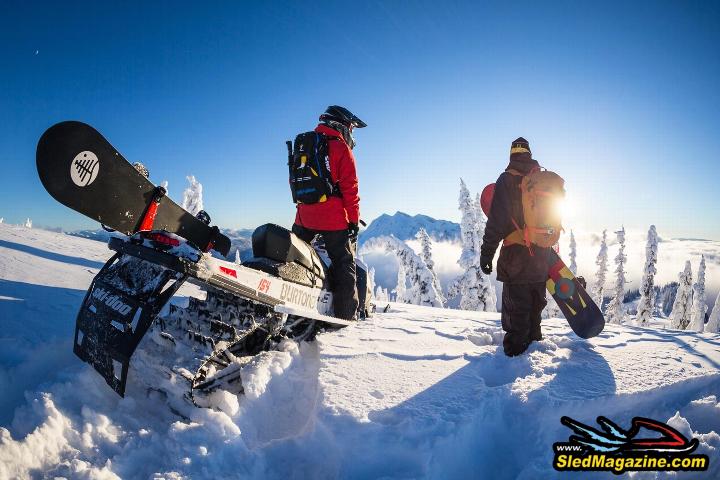 It has been specially designed to carry, off-trail, snowboarders and skiers on top of mountains. It is equipped with a REV-XM dual seat and a LinQ support for snowboard or skis. With a 392 cm / 154 in. track, this snowmobile standard engine is the powerful 800 E-TEC engine.

A very spectacular introduction happens in the recreation-utility category with the new Expedition Xtreme. Built from the REV-XU chassis, this extreme snowmobile takes some characteristics from the MXZ X-RS and Freeride models. 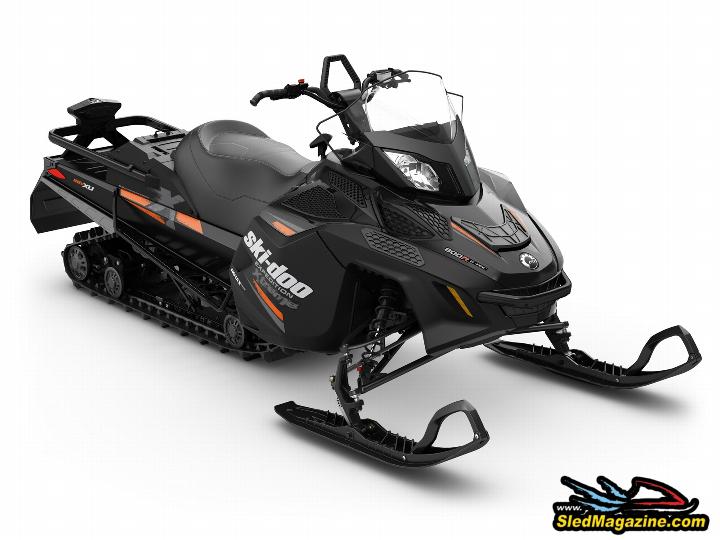 Expédition Xtreme 2016: This model was expected

Among others, its standard equipment includes the high-performance KYB Pro 36 shocks and the 800 E-TEC engine. Its track of 392 X 50 cm (154 X 20 in.) will let the snowmobiler go everywhere and very quickly. This model is definitely the most sporty snowmobile of the utility category ever built.

Introduced in 2015, the RAS 2 front suspension is now a standard equipment on most of the Grand Touring, Expedition, Freeride and Summit models. Improvements have also been achieved on the models equipped with the very reliable and efficient Rotax 1200 4-TEC engine. Introduced in 2009 on the REV-XR platform, they are now offered on the REV-XS chassis. 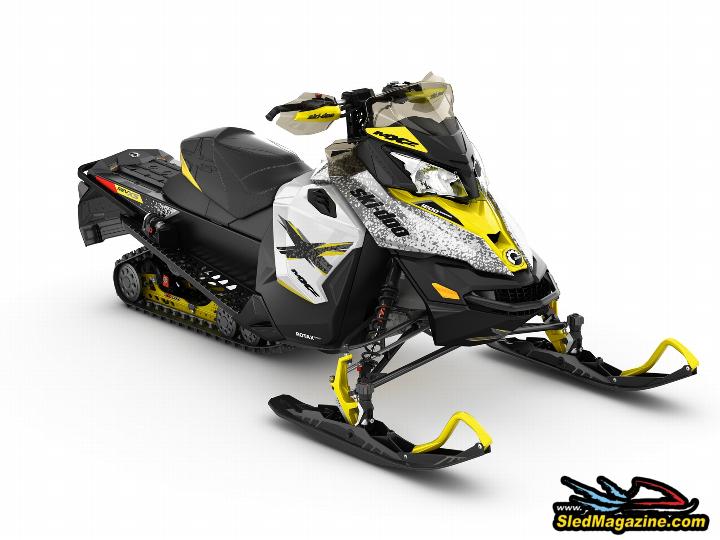 Also, for a better performance and efficiency, this engine is now equipped with the iTC technology of intelligent throttle with 3 driving modes (Sport, Standard, ECO). 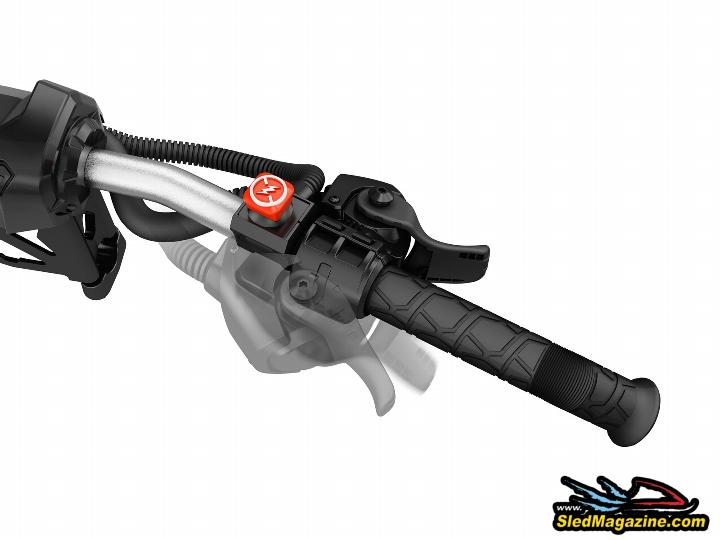 The Grand Touring model is also revamped by being assembled on the REV-XS platform. The SE edition remains the ultimate comfortable 2-up touring snowmobile with the addition of the RAS 2 suspension at front and the rMotion with ACS at rear. This model will also be equipped with the new Pilot TS skis as standard feature for the best touring control. 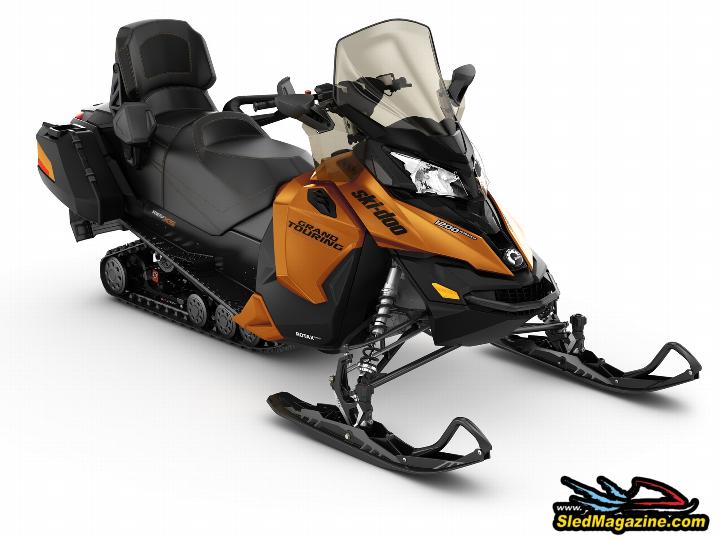 In the crossover on- and off-trail category, the Renegade Backcountry standard and X models are now built on the REV-XM chassis, with the tMotion and a 371 cm / 146 in. track. The ski stance remains at 102 cm / 40 in. for excellent trail performance. 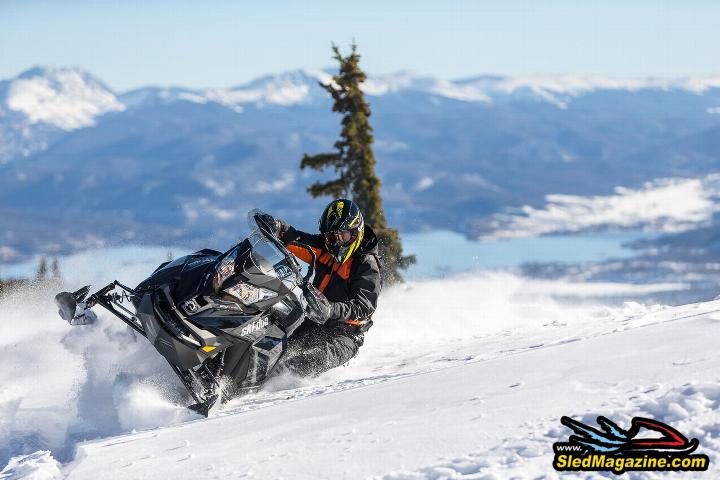 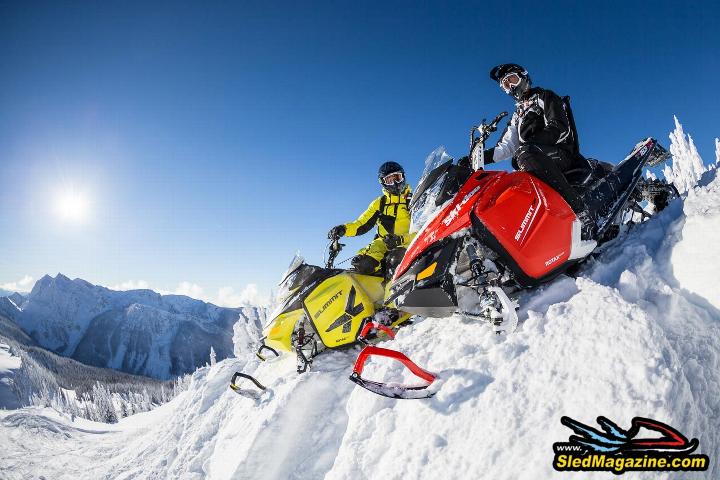 End of production for the GSX lineup

The GSX models have been produced for the last time in 2015. The important decrease and low demand for Sport-Touring models during the last years in the snowmobile market is the main reason for this change at Ski-Doo’s. With the addition of some optional accessories, the MXZ and Renegade lineups will sure please the traditional fans of the GSX LE and SE models.

For more details, please click on www.ski-doo.com  or visit a BRP Ski-Doo dealer near you. 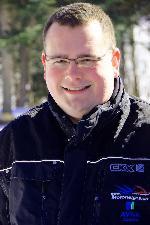