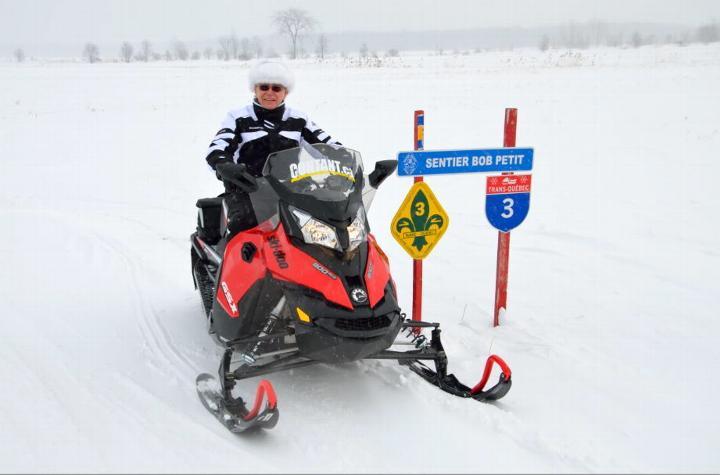 Snowmobiling. Those who participate in the most popular winter sport in Quebec, snowmobiling, are spoiled.  Beautifully groomed trails have proliferated with the passing of the years, making easy access for riders to travel from one region to another in the French province. For all of this to be possible however, it took an idea and a vision from one volonteer, forty years ago, and that man was 75 year old Bob Petit. From this day forward, the portion of the Trans-Quebec 3.

Trail that runs through the Lanaudière and Mauricie Regions, has been re-designated as the Bob Petit Trail.The members of the Bon Vivant Snowmobile Club, called together all the clubs of the Maurice and Lanaudiere regions, to promote their idea of honoring Petit for his six years of efforts back in the 1960`s, to make it possible for snowmobilers to enjoy 803 kilometers of connected trails between Mont-Laurier and Quebec City.

"Forty years ago I lost two friends who died in snowmobile accidents because they were riding along a public highway", said Petit, dressed in a snowmobile jacket, holding his helmet in hand at the inauguration of the trail, which took place at the Bon Vivant's groomer garage in L'Assomption.  "That same year I was seriously injured in an accident as well, and spent six months walking on crutches. Enough, I said."That's when the idea 'clicked' in his mind. Within days, he pulled together a few friends and they began to brain storm. "How could we create a system of groomed trails that would carry snowmobilers safely to every region of Quebec? We started to make a list of people that would give us rights of passage on their lands."  At that time, the sport of snowmobiling was disorganized. Private property owners often had their fences cut by free ranging sledheads, there were no groomed snowmobile trails, and serious accidents were a  frequent occurrence.

We started to collect rights of passage from land owners, and assured them we would manage and groom the trails. This, we argued, would prevent people from cutting fences in other places. We would also commit to cutting trees and shrubs that grew on those frequent occurrence.

What Petit didn't explain was that during those six years of organizing clubs and convincing them to join their trails up in a continuous trail, thousands of dollars were spent and countless hours of hard work, were offered freely by passionate volonteers. Never-the-less, in 1975, these determined snowmobile pioneers were proud to announce their first Trans-Quebec trail, strictly dedicated to snowmobile use.

A Sport that never gets Old

Thanks to the establishment of this first unique snowmobile trail, 803 kms that connected Mont-Laurier to Quebec City, the multi million dollar snowmobile tourism industry was born. Through the years, dedicated volounteers in 13 regions of Quebec, have developed simillar trail systems that now connect the entire province with over 32,000 kilometers of safe, groomed and managed trails. Quebec also boasts the world's longest snowmobile trail, uniting the town Grenville in Outaouais, to the province's furthest east municipality, Blanc-Sablon. That's a staggering 1,763 kilometers of smooth, fast, white carpet, a trail that will spark the imagination and bring a bright smile to any snowmobile enthusiast, anywhere in the world. "Our trail system now attracts an incalcuable number of riders, Petit said, with a satisfied smile."