More power in the mountains for the 2022 Polaris snowmobile 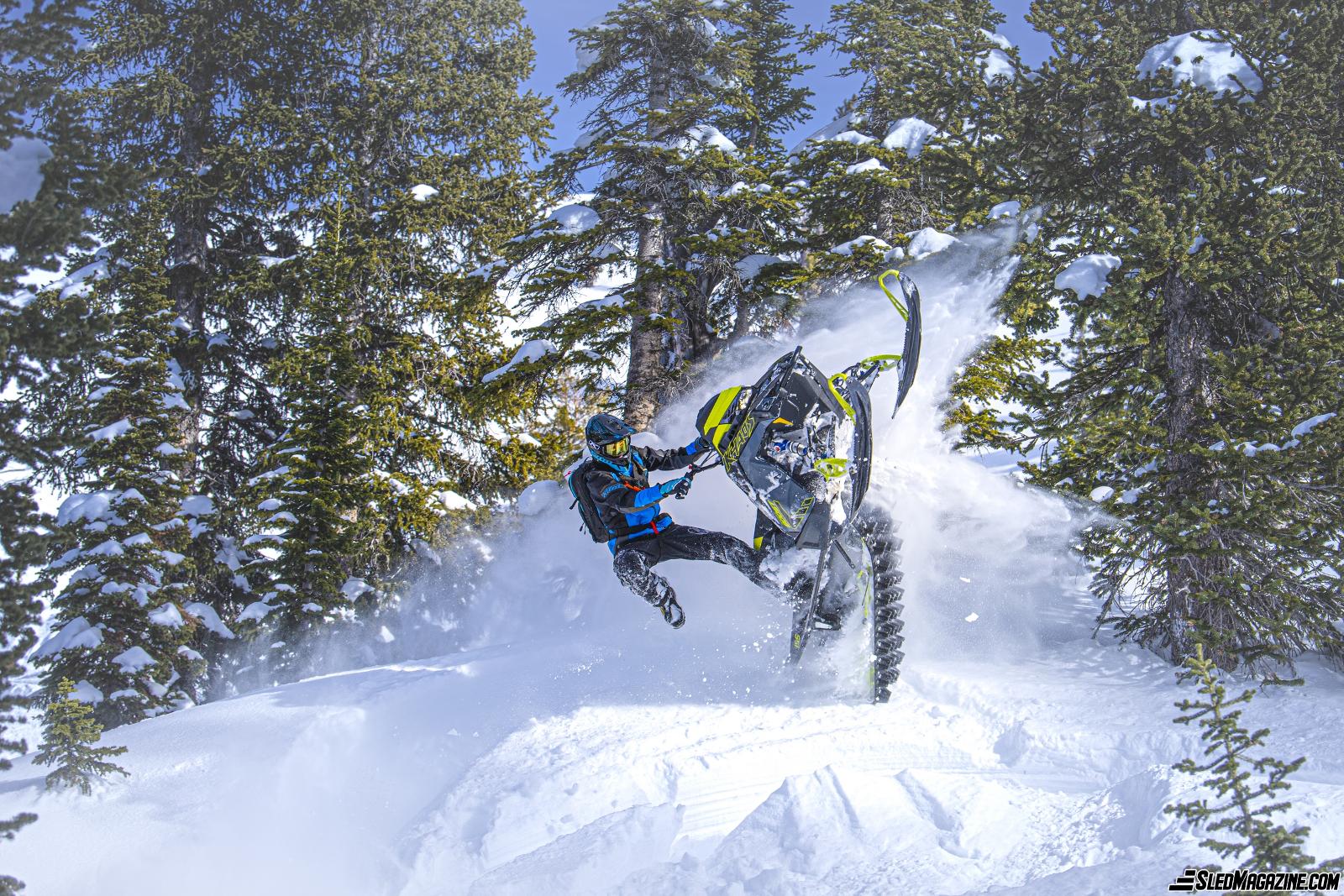 The war between manufacturers for the conquest of the mountain snowmobile market has become increasingly intense these last few years, but for the benefit of consumers. More powerful, lighter, more agile, the objectives remain the same for each of them, but we can say that the launches are big moments for the manufacturers. All efforts are put forth to produce THE snowmobile that will go the furthest are finally unveiled. In my opinion, since I've been a columnist for the magazine, this is the biggest Polaris unveiling in this segment.

If I say BOOST, MATRYX and short tunnel, does that ring a bell? Well, read on, you won't be disappointed.

The MATRYX platform is now on the RMK, as much for the Pro version as for the Khaos. The way it is designed, control is easier and rigidity is further improved. The rider is in a position that allows him to move better according to the terrain. The engineers made it even narrower which gives the rider more freedom of movement.

The suspension has also been reworked to provide even more transfer in snow while maintaining the approach angle in deep snow. The platform is higher to reduce snow accumulation and improve side hill and flotation.

The tunnel has been modified, it is shorter and more tapered, to once again reduce snow accumulation and at the same time, reduce the weight that accumulates in the tunnel. Also, the cooling system has been centralized to reduce the accumulation of ice and snow and reducing the actual weight in the tunnel. Unfortunately, we do not have the weight at the time of writing. What the people at Polaris are saying is that the snowmobile will be similar in weight to the AXYS version, but the actual weight in the snow will be changed considerably.

In addition to the new platform, Polaris has also added the Slash version, only available during the spring order. Like the Standard version, there is a centralized cooling system, but in addition, there is a short tunnel for even less snow accumulation, allowing the snowmobile to get even more traction. To give you an idea, the tunnel on the MATRYX platform is 3 inches shorter than the AXYS and the Slash version is 5 inches shorter than the other MATRYX version. The MATRYX Slash is THE best version of Polaris 2022. It can dig further without getting stuck and also keeps better momentum in extreme conditions. 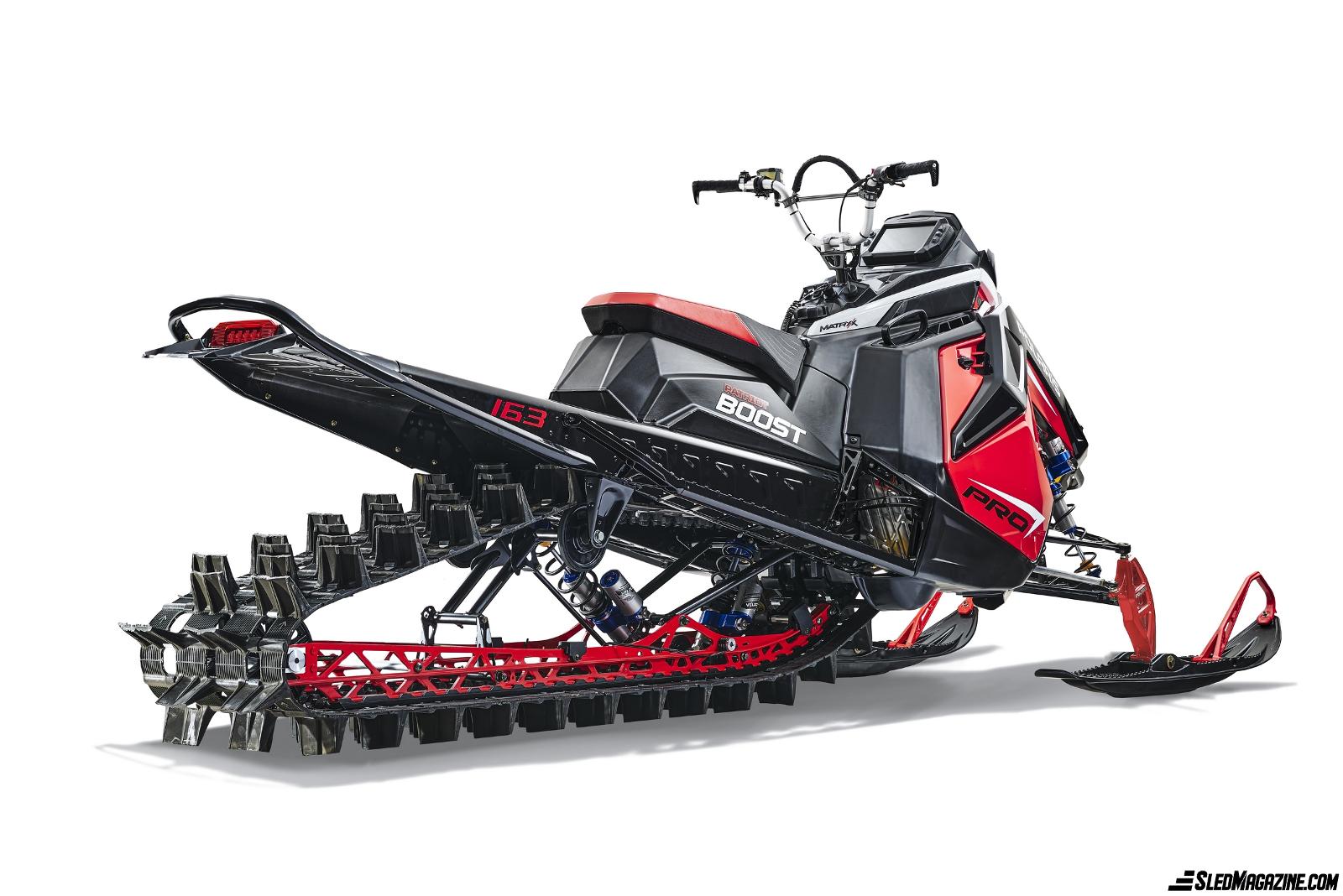 In the Slash version, there will be a Khaos 146, a new track length for the Khaos range. This snowmobile is more designed for people from the East, because they don't always have significant accumulations of snow such like in the West. It is not always necessary to have the longest tracks to avoid getting stuck. This winter confirms it. The Khaos 146 will be more playful than the other models of the RMK family.

When you say MATRYX, you say technology. Even the mountain range will have, as an option, the 7S Display gauge with Ride Command technology. We're talking about a 7-inch touch screen with several settings and functions, including Group Ride, which allows you to see the other riders in your group on the GPS.  A rather practical function in the mountains. 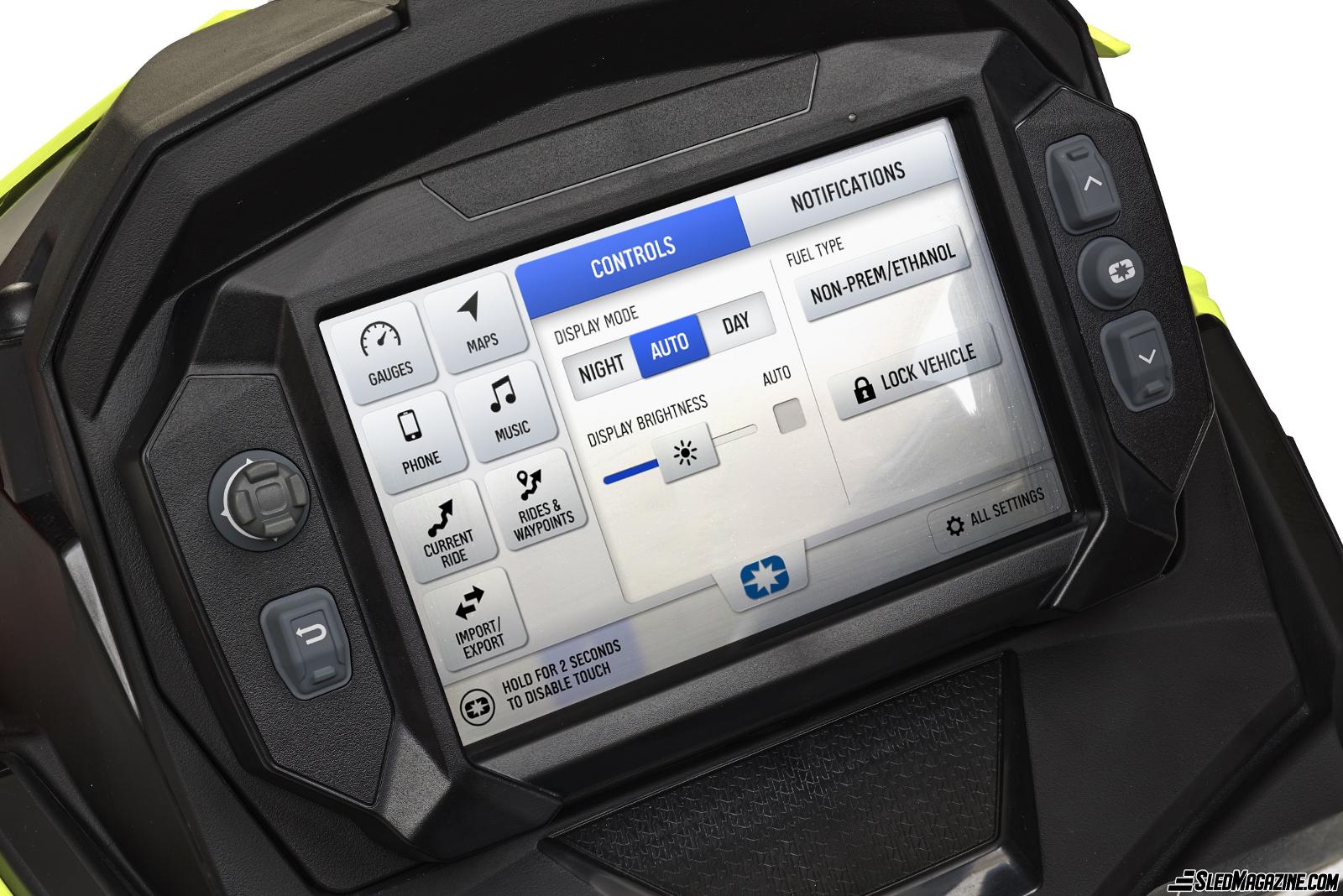 I haven't seen any information on the subject, but from what you can see on the console, there seems to be a standard Kill Switch cord… if that's the case, it's about time! 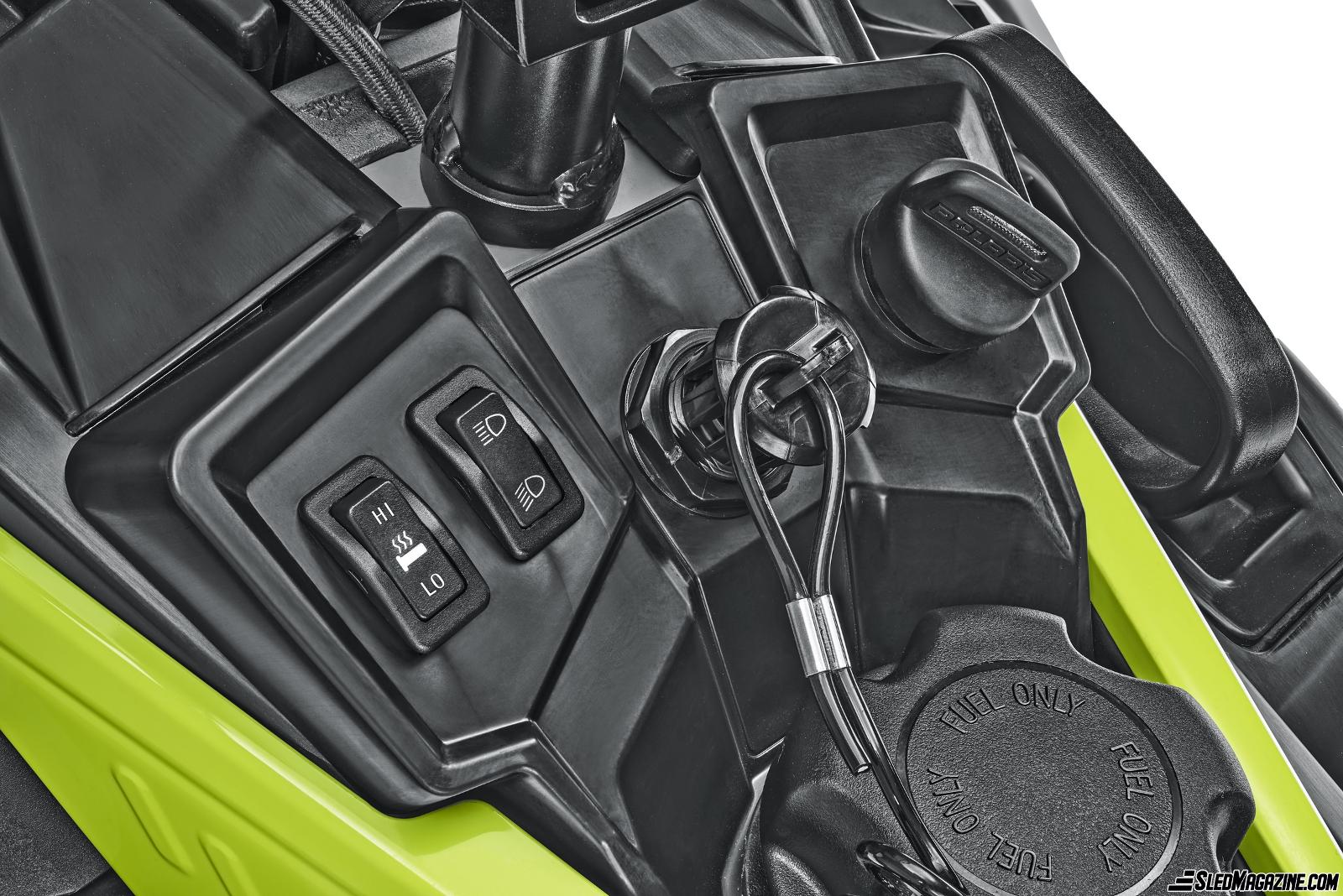 When the Patriot was designed a few years ago, it was made to look like a real beast. So here it is, for 2022 Polaris is launching the Patriot Boost. As you can see, the Patriot 850 now has its Turbo version. With the SmartBoost system, the engine has more power, everywhere. We're talking about 10% more power at sea level and 50% more at 10,000 feet of altitude with 9 psi of pressure. SmartBoost technology provides stable combustion, which will not neglect reliability. As the altitude increases, the turbo will gradually compensate up to 10,000 feet to maintain full engine power.

The base of the engine has been improved to better support the air pressure. There are several other elements that have been modified, you can read my article about the engine in more details here. The new P22 clutch, designed to support the performance increase, will be available only on the turbo version. The throttle body is the same as the 600 Snowcross racing engine. 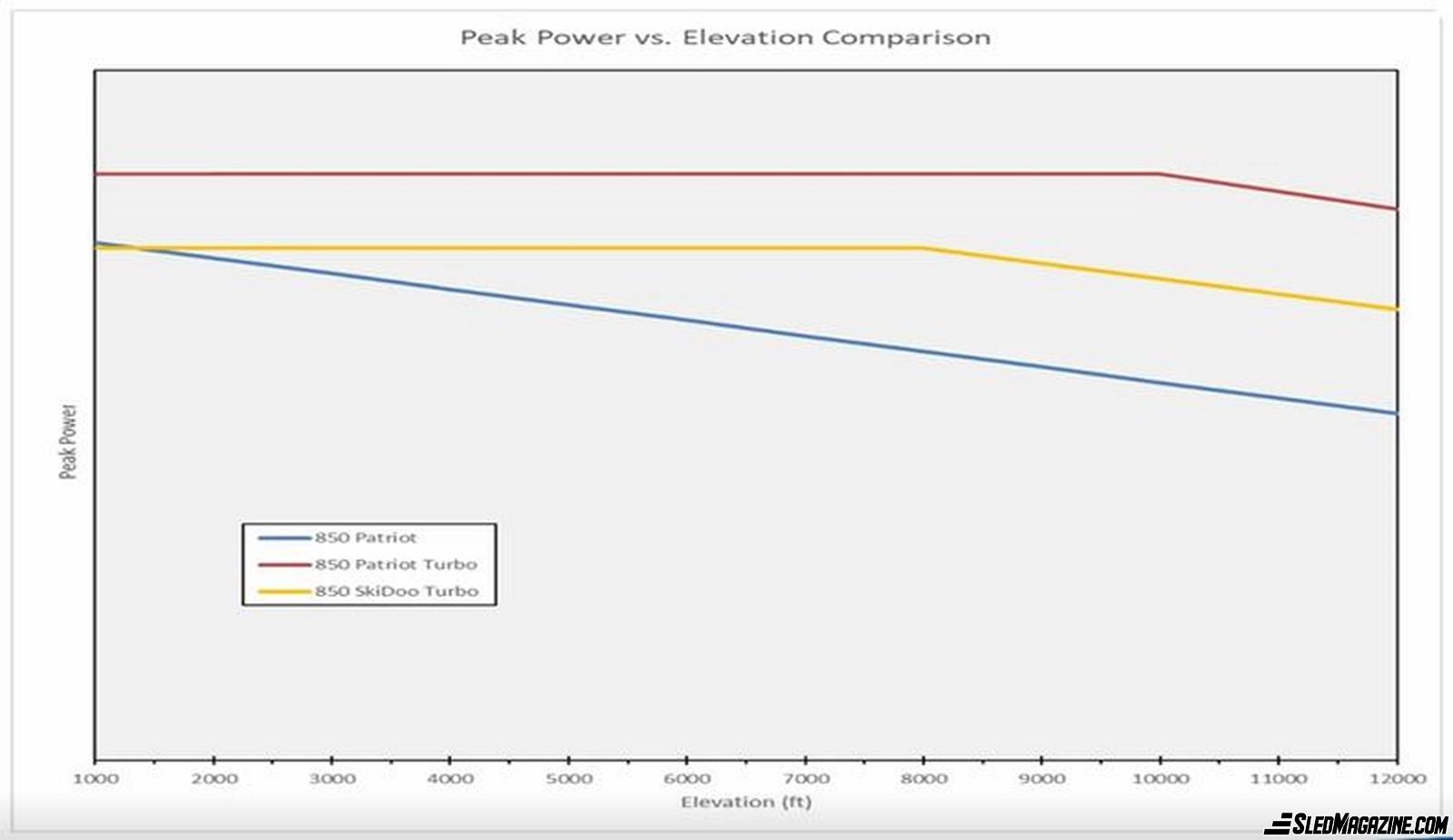 The turbo is installed vertically on the machine and its rotation is upside down to improve the ergonomics of the hoses. This turbo is 40% lighter than the sets available on the market. 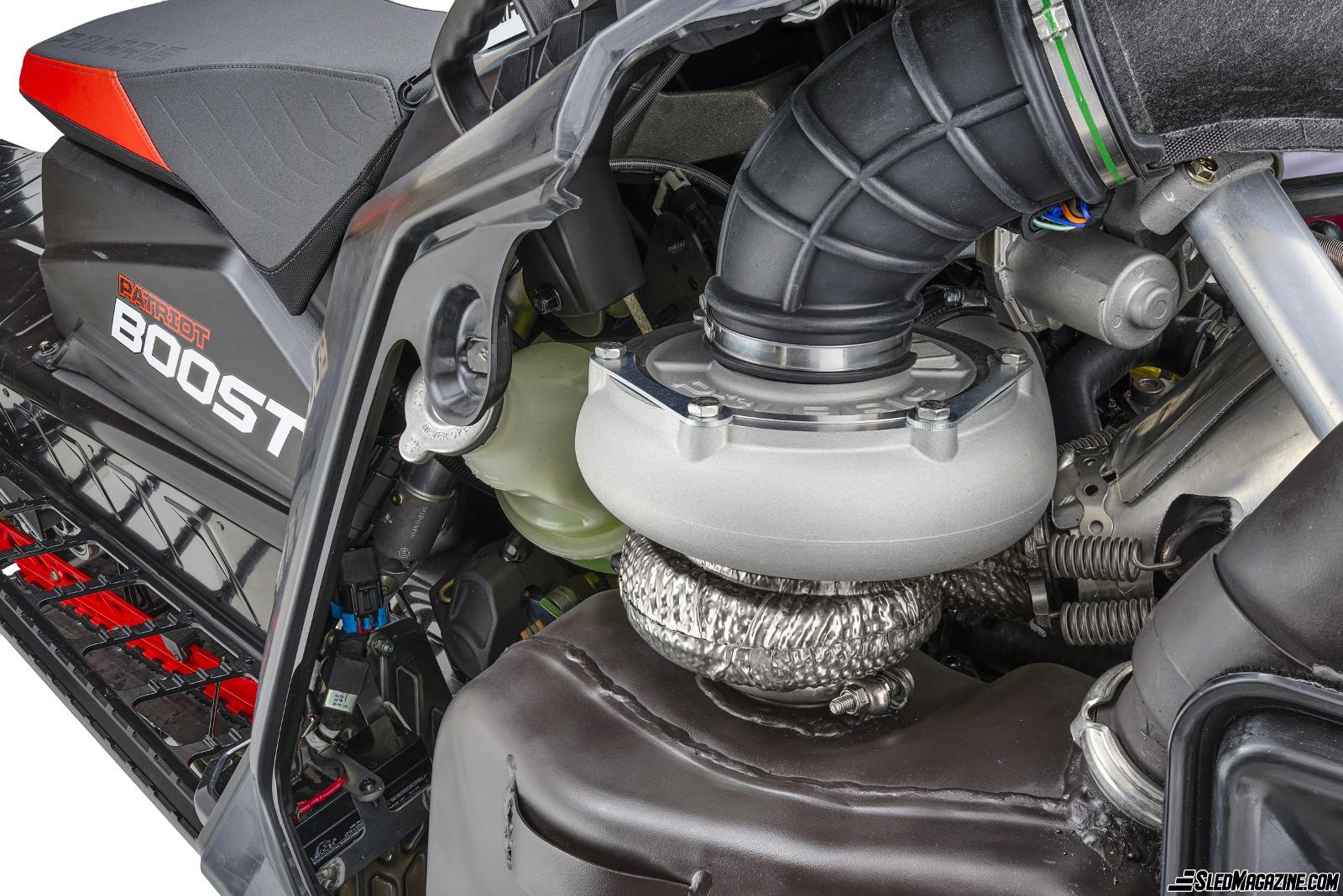 In other words, the MATRYX platform will be available during the season in the Pro-RMK and RMK Khaos in the 155 version only. For the Pro, the snowmobile comes with a choice of two tracks, the 2.6-inch Series 6 and the 2.75-inch Series 8, as well as a choice of engine between the 650 and the 850, while the Khaos comes only with the Series 8 and the 850 engine. 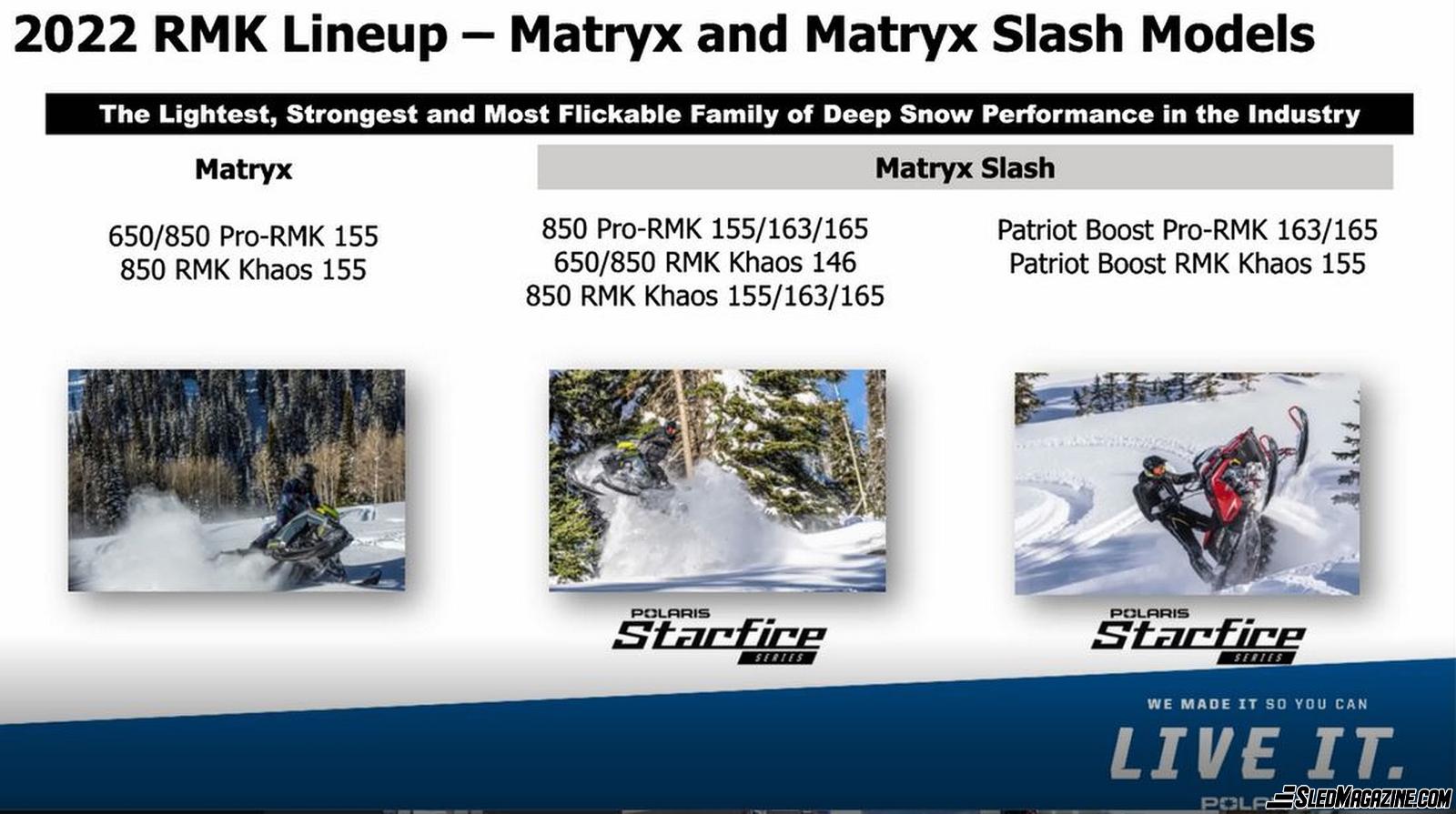 You can see the different possibilities for purchase here.

The MATRYX Slash platform will be available in spring order for the Pro-RMK and RMK Khaos according to the different choices of engines and tracks. 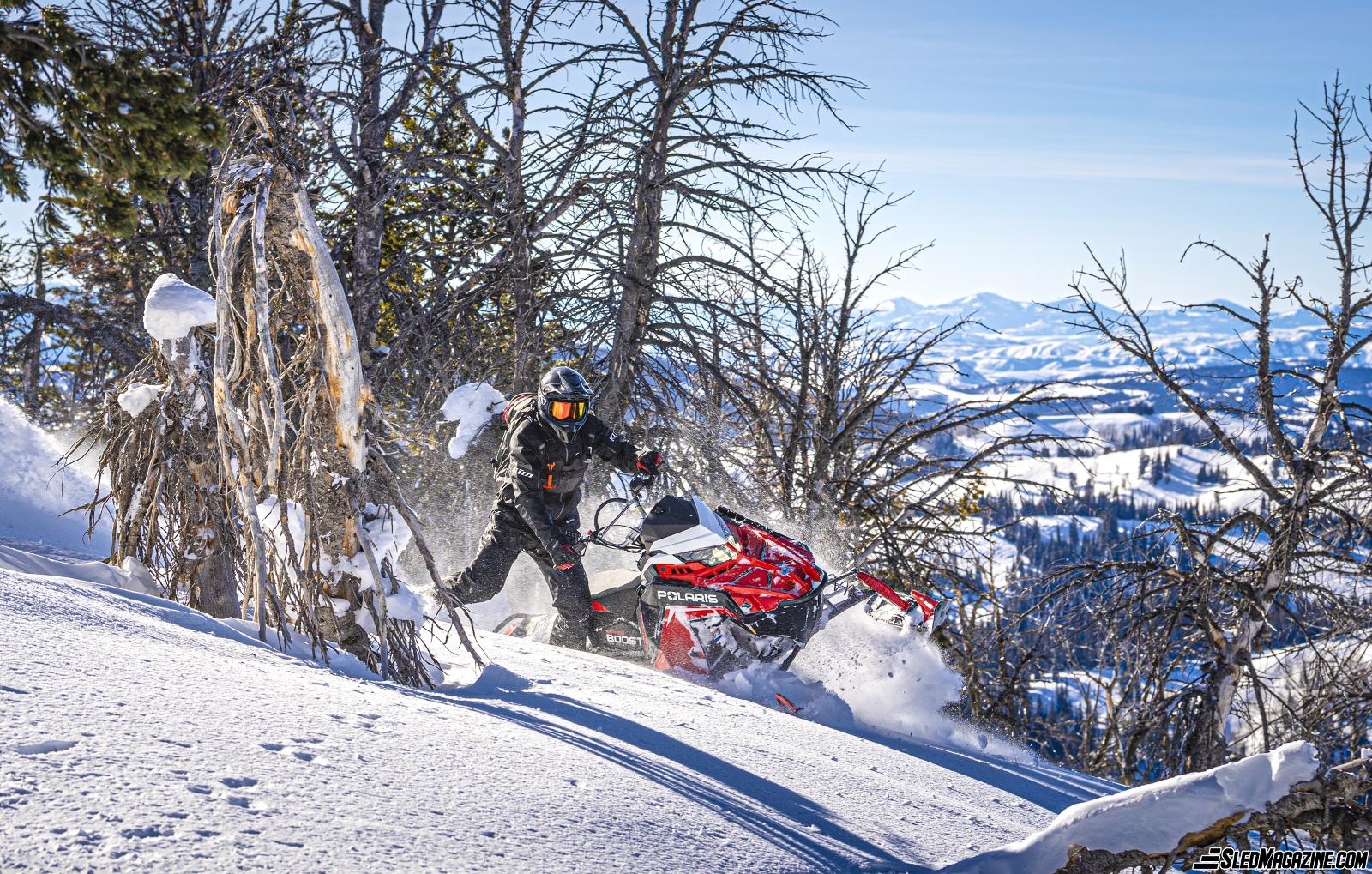 Honestly, with all these new features, I wish for lots of snow for winter 2022 and a test ride of this new mountain beast. 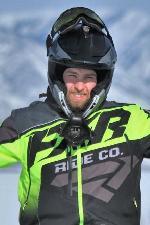