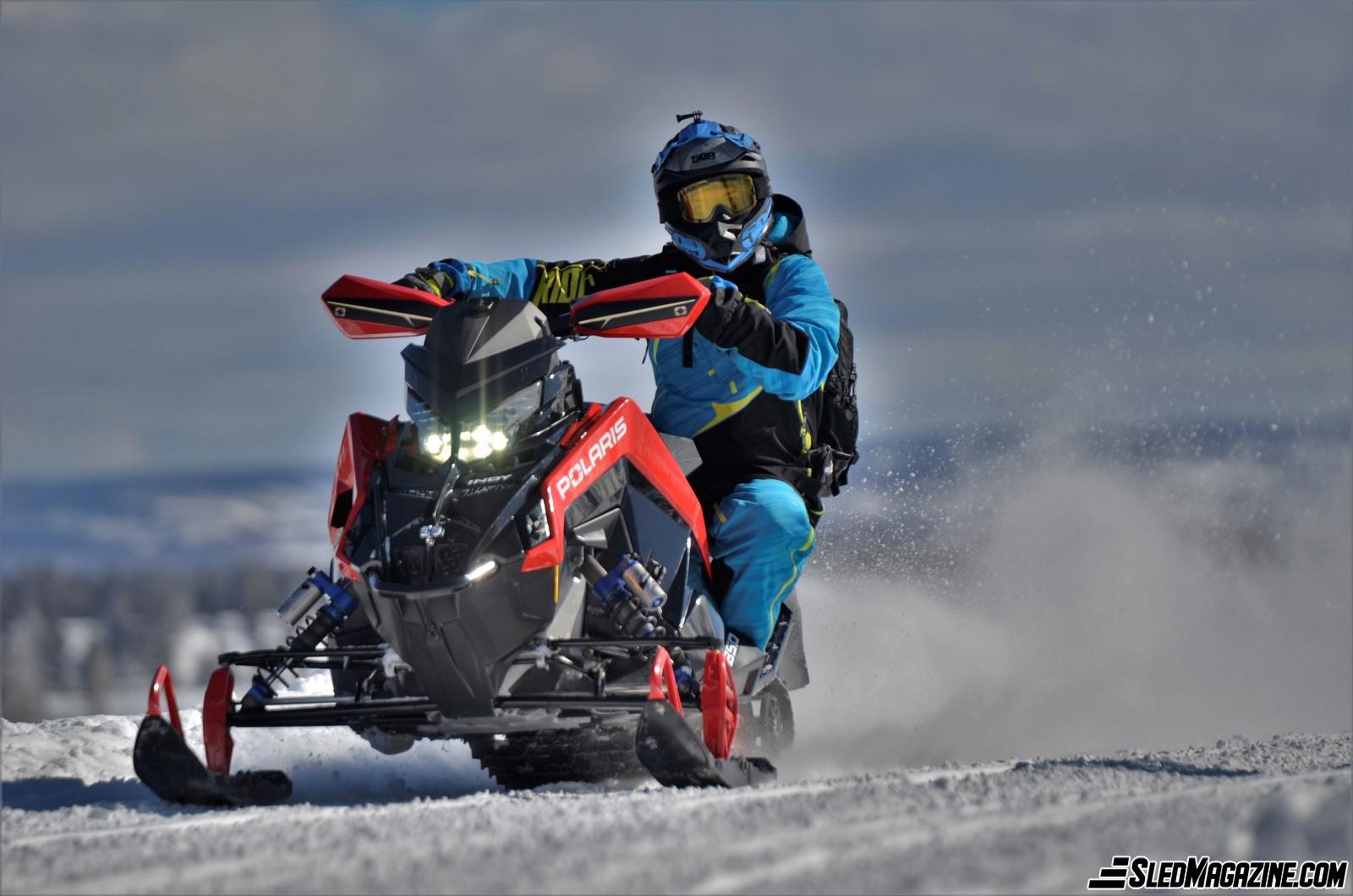 Faithful to the trend they have accustomed us to in recent years, Polaris has had many surprises in store for 2021. First, as expected, the manufacturer introduced the 650 Patriot engine. In fact, it was written in the sky that Polaris would introduce a little brother to the 850 Patriot sooner or later. It is now a done deal. It is important to note that this new engine is only available for spring orders (Snowcheck).

For me, the thing that surprised me the most was the arrival of the new Matryx platform. It is an evolution of the AXYS platform, which is considered one of the industry’s best platforms. The Matryx frame is about 7 cm narrower. It is inspired by the chassis found on the racing models of the Polaris team.

Several new models are built on this platform, including the Indy VR1 129 and Indy VR1 137. It was the latter that first caught my eye. Of course, I was also really looking forward to trying the new Switchback Assault 146 built on the same chassis. Having driven Switchback Assault 144s over the past few years, this is a model that I really liked, so I was curious to try this model on a Matryx chassis.

The VR1 quickly impressed me. As soon as I hit the first turns, I could see how easy it was for the machine to handle them. The narrower frame allows the body to move from left to right when turning corners at higher speeds.

The suspension absorbs a lot of small and medium bumps making the riding experience more enjoyable. You don’t feel displaced in the turns, and the skis stay well in contact with the trail. When you’re on rougher trails, the snowmobile remains predictable, which gives you a feeling of confidence with your ride. 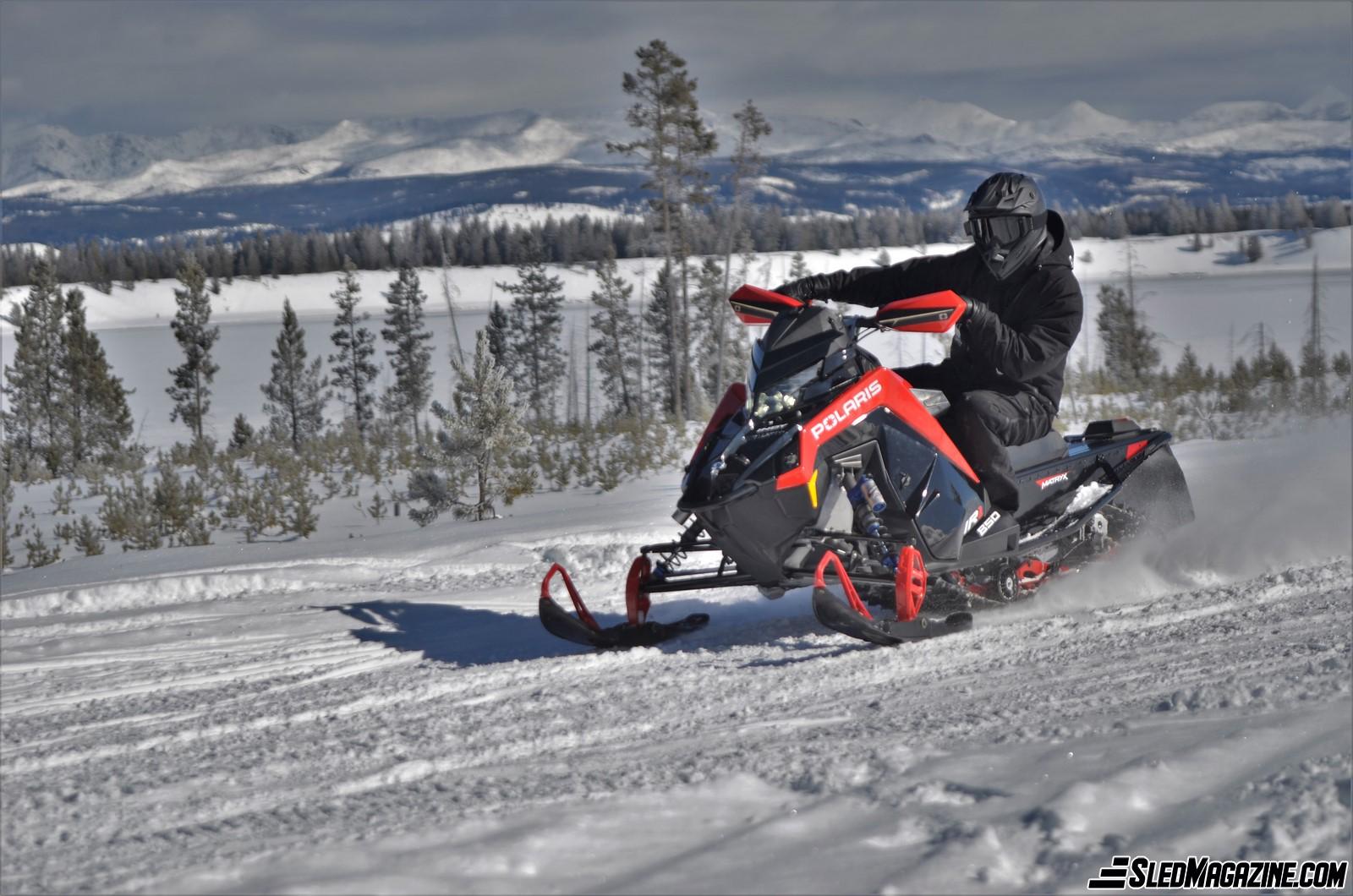 On the engine side, I’ve only had the opportunity to drive the 850 Patriot on this model. I was able to enjoy the handling of this engine that I like. On the Matryx platform, the match is perfect. The only negative point is the sound of the starter when turning on the engine. Its noise does not affect its effectiveness in any way.

So, the Indy VR1 137 makes its way onto my list of candidates for my 2021 favorites at Polaris.

Over the past few years, the SwitchBack Assault 144 built on the AXYS platform has been one of my favorites. So, I was curious to see if the 146-inch version on the Matryx chassis would live up to my expectations and if it could outshine the Indy VR1 137, which is right at the top of my list.

The new 650 Patriot engine powered the model I was able to test. I was greatly impressed by its behavior. Its performance is astonishing, and I had to look twice in the snowmobile cockpit to make sure it was a 650.

The power range is definitely greater than the 600 Cleanfire. The 650 vibrates less and responds more predictably. One of the interesting features of this engine is that it is designed for regular gasoline. 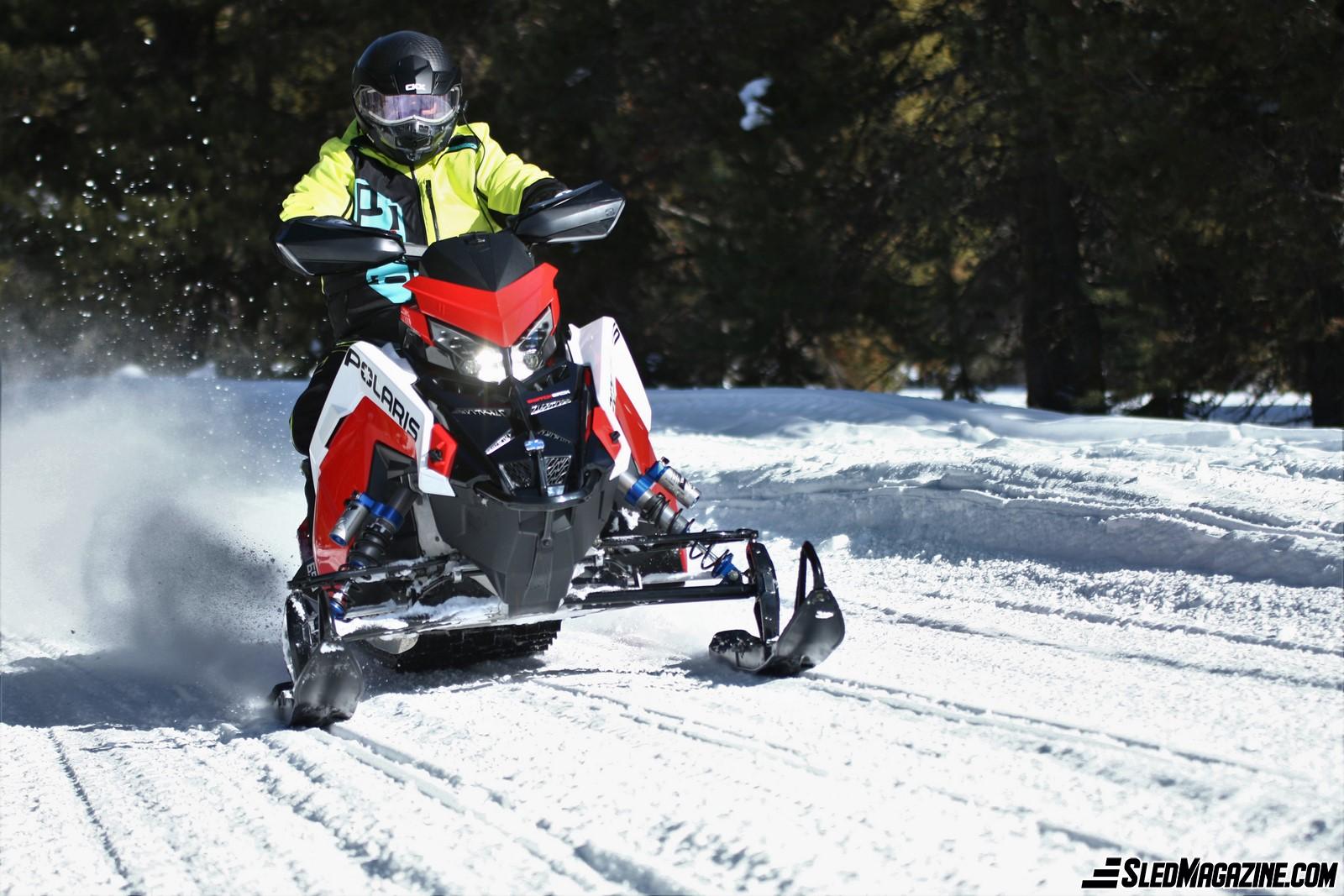 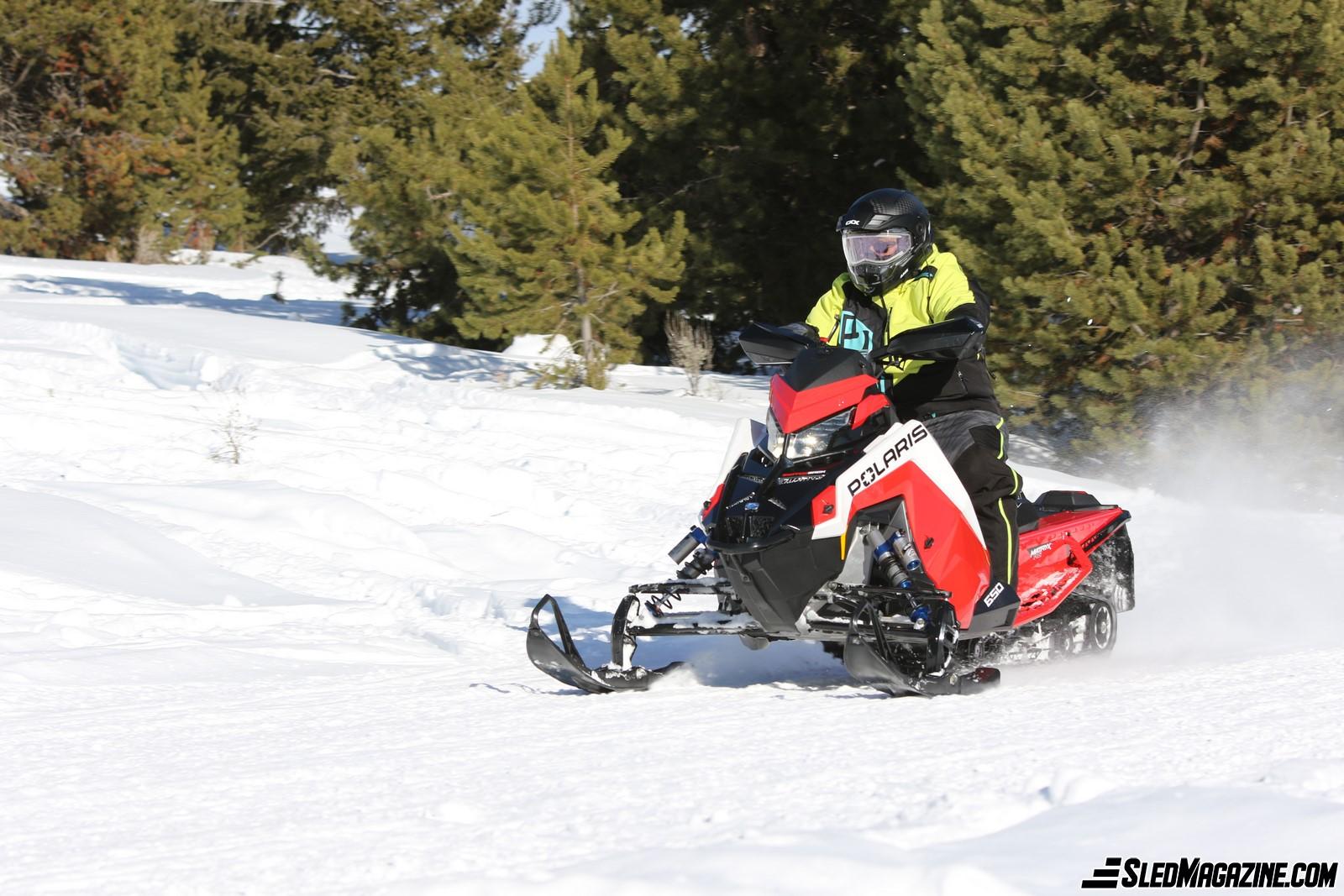 Since the Switchback Assault is a hybrid snowmobile designed for active riding, the narrower Matryx chassis makes it easier for the rider to move sideways. Driving on rough terrain or winding trails is easier, more intuitive and requires less effort. In short, I find the same pleasure as the 144-inch version on an AXYS chassis, but with a notable bonus.

The Switchback Assault 146 quickly earned a place on my list of my favorite Polaris models in 2021.

It is rare for me to hesitate so much in choosing my favorite model at Polaris. Usually, one would stand out and differ from the others. For 2021, two models have won my snowmobile heart.

After careful consideration, I will opt for the snowmobile that I found easier to handle and offered me the best comfort. I am also choosing the one that I would most like to have in my garage, which is the Indy VR1 137. 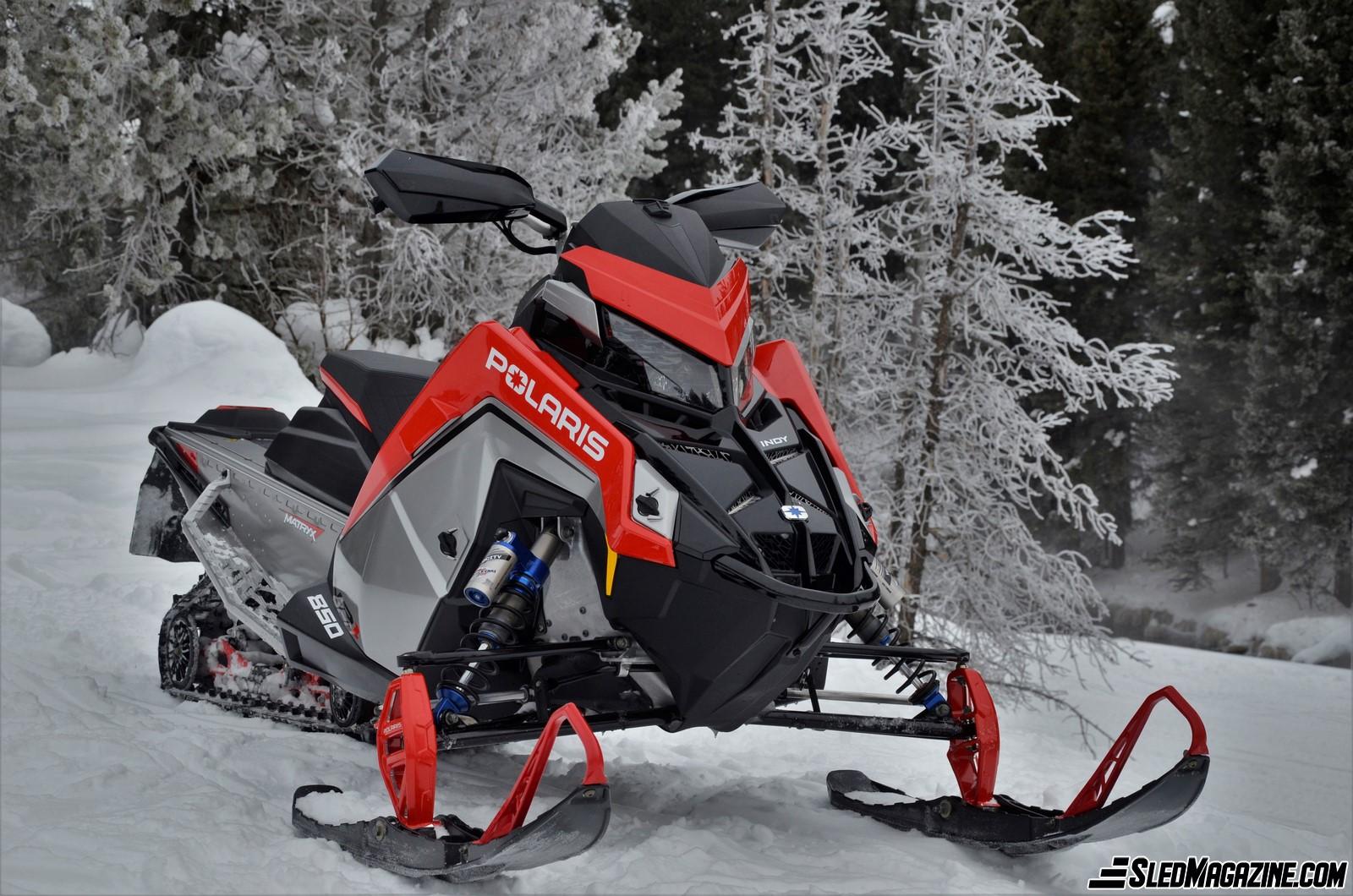 The model I tested was equipped with the new version of the digital gauge, the 7S Display system with Ride Command. I hadn’t alluded to this new display before because I didn’t want to take it into account when choosing my favorite. My choice was based purely on the behavior of the snowmobile and not on its equipment.

The 2023 MXZ XRS is back with an improved Gen5 version!

This system includes all snowmobile trail maps for the United States as well as Canada. It was unclear this spring whether Quebec trails would be included.

A big novelty is the touch screen. You can browse and select the different features with your fingers from the screen as you can on your cell phone.

You can also form a group with other snowmobilers who have this system. You can check their position on the GPS map. The system allows the gauge to be configured to contain the desired elements (parameters). Up to 4 different screens can be created. Of course, you can also listen to music or take calls from your cell phone.

Finally, a very innovative element is the possibility to choose the temperature for each of the 3 levels of the heated handles and thumb. Note that these will be at the exact temperature specified, regardless of engine speed or conditions. This system is similar to some cars where you can specify the desired temperature in the passenger area. You no longer need to choose the maximum intensity and lower the level when the heat becomes unbearable.

In closing, I would like to mention that the Indy XC Launch Edition 137 and the Indy XCR also did very well in my tests, but I wanted to limit myself to only 2 candidates for this article.

Have a good season!