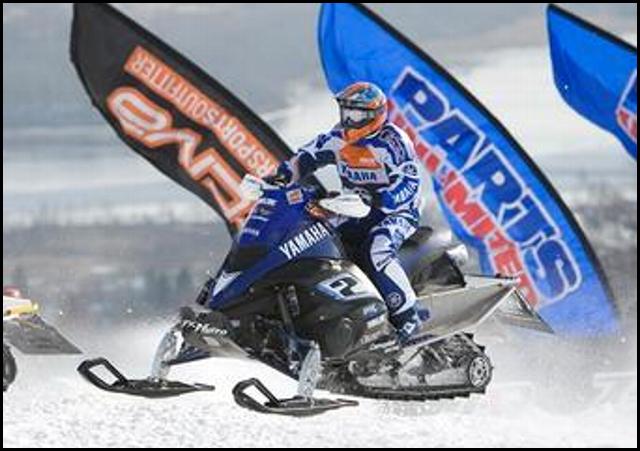 The Yamaha Factory Snocross team and their new FXNytro thumpers made their debut performance at the opening round of the WPSA Snocross series, the Amsoil Duluth National Snocross in Duluth, MN, Nov. 23-25. Pro riders Steve Taylor (# 2) of Prince George, BC and Yuji Nakazawa (# 36) from Shizuoka, Japan joined Swedish Snocross champ, Johan Eriksson (# 160), who was flown in from Sweden to fill in for injured Semi-Pro Cory Davis.

The first round of the season is a test for any team and Yamaha has been on the gas to get the FX Nytro machines dialed in for Duluth. “We want to showcase the four-stroke and develop its capability under National-level snocross racing,” said Yamaha Factory Snocross Team Manager Greg Marier. “We have been working not only on four-stroke power potential but also on developing the chassis and suspension around that four-stroke power. We went up into Canada for early snow, but Cory had an unfortunate accident and cracked his collarbone and will be out for four weeks. We brought in Johan Eriksson, Swedish snocross champ, who will be racing the FX Nytro when their season starts in Europe. He’ll be helping us continue our development here.” Eriksson has been racing sleds for 14 years, and was very happy to get some time on the new sled before his own season starts in Europe this January. “It’s a great opportunity for me to come over here and meet the team and race the new four-stroke,” says Eriksson. “I’m not used to the suspension and handling yet, but we are making adjustments and the sled keeps getting better with each race. I finished 5-2-5 in Semi-Pro Open but had a crash in the last race. I just need more time to adapt the machine to my style. But as far as the motor goes, nothing beats it! Unbelievable!” Eriksson is a tall rider (6’ 5”), and Marier says the team has been busy making ergonomic changes including a taller seat and handlebars that will undoubtedly help put the Swede up front in coming weeks.

Assisting the race development is the Yamaha Minocqua Race Team, working under Team Manager Masa Saito and Pro rider Yuji Nakazawa. “The Minocqua team has Yuji working closely with the Yamaha engineers to develop ideas for possible future production,” says Marier. “They will be focused on product development closely based on the FXNytro and hit select races depending on their testing goals.” Nakazawa, who has been working with Yamaha on the four-stroke project for three years, says “The sled gets better all the time. I raced Pro-Open at Duluth, but didn’t make the final. Round-one I got sixth, round-two sixth, then in round-three I got the holeshot and led until I was passed by two riders and finished third. I really like the four-stroke, and look forward to racing at Park X and the next national at Shakopee. Lake Geneva will be really great, because the four-stroke makes such good power that it will work very, very well on the uphills.” 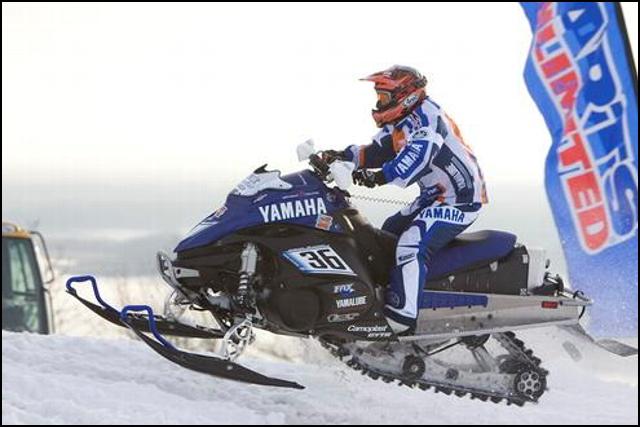 Duluth was a weekend of race-set-up calibration for the Yamaha Factory Snocross team, who were kept busy making adjustments and finalizing setup. The intense media pressure that comes with running a fledgling four-stroke team had them in the spotlight, but they still performed admirably…especially for a first date. “Steve missed qualifying by one point and had to go to the Last Chance Qualifier,” said Marier. Taylor adds “I went 4-3-4, and if I had a third in the last one I would have went right into the final but I had to go to the LCQ. The course was gnarly, that’s the only way I can put it. No enormous holes, but there were lots of square edged kickers everywhere and I saw people fighting them all day. I’ve been working with Fox, and our suspension gets better all the time.” Things looked good going into the LCQ, where Taylor was in a good position to make the transfer until a drive axle sprocket spun on its shaft causing a crash that put him out of the race. “This was a really good day…besides the crash,” Taylor says. “It was a bad deal and sometimes freak things happen. It was nobody’s fault, but it spit me off. I was getting ready to take off over a double in the rhythm section and grabbed the throttle, but there was nothing there so I augured in and went over the bars.” Taylor is tough, and Marier says “I’m really impressed with Steve’s conditioning,” relates Marier. “He’s in top-notch shape, and he’s really shown that he has what it takes this weekend.”

“Everybody worked really hard to keep the team moving forward and we had some decent results,” said a very stoked Taylor after the races. “This engine hauls! They have that thing working really well and it doesn’t miss a beat. The weight isn’t too far off the two-strokes and though I’m not a big guy I don’t have trouble throwing it around. We’ll be good to go for testing and regional races over the next few weeks before the next national, and things will just keep getting better!” 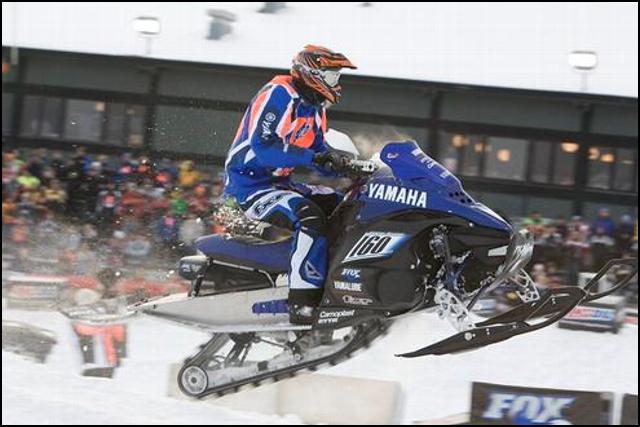 Next stop in the WPSA tour is the Air Force Canterbury Snocross in Shakopee, MN, Jan 11-13. That well-timed break gives the Yamaha Factory Snocross riders a chance to recover and continue their heavy R&D schedule, so things look great going into round-two. Marier, positive about the weekend’s results and the direction the team is heading, says, “We are racing as a development program. Steve is a finesse rider, so we are working on calibrating the machine to his style and improving durability all the time. We’ll be testing and racing at a regional level to be ready for the second National round.” OTSFF, highly recommended based on their professional motocross experience in Canada, is providing transportation and logistics for the Yamaha Factory snocross team