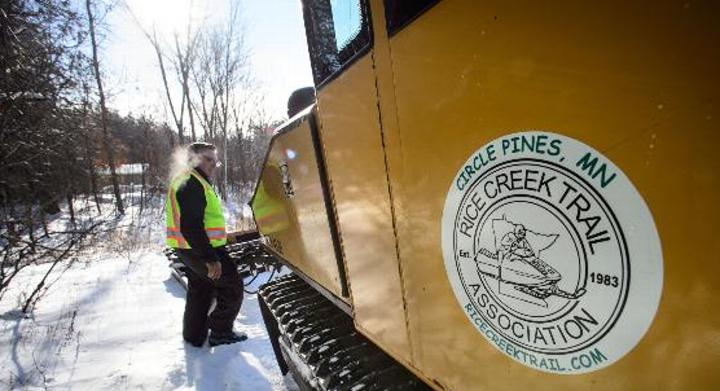 Sitting in the cab of a 10,000-pound grooming machine recently, on a snowmobile trail in Anoka County, Bill Prinsen puttered along between 3 and 5 miles per hour as he smoothed the trail’s moguls and other blemishes into a flat, snowy thoroughfare.

“I’d much rather be sitting on my snowmobile than running a groomer, but when the trails need grooming, the trails needs grooming,” said Prinsen, president of the Rice Creek Trail Association (RCTA) in Circle Pines, one of roughly 200 state snowmobiling groups.

Bill Prinsen puttered along between 3 and 5 miles per hour

The snowmobiling season may be in its early stages, but for RCTA members such as Prinsen and others, trail-building and maintenance began in the heat of summer and, depending on the weather, could last well into March. “Getting the trails ready is a lot of fun, but it’s also a lot of work, which is why we’re always looking for more volunteers,” said Prinsen. “We’re always looking for new blood to pick up the slack a little bit. It’s a long season.”

Minnesota boasts 22,000 miles of groomed snowmobile trails, the vast majority of which (about 21,000 miles) are built and maintained by local clubs and their volunteers. Many say this grassroots arrangement helps enhance the state’s thriving snowmobile culture.

“Snowmobiling has a great tradition in Minnesota, and that tradition has been greatly enhanced through the efforts of volunteer snowmobile groups,” said Leland Owens, recreational vehicle coordinator for the Minnesota Department of Natural Resource’s Division of Enforcement. “I’ve worked closely with our volunteers and they’re passionate, dedicated servants who get little back in return. They really put their hearts and souls into their work.

“Snowmobiling is every bit a part of our culture as ice-fishing or eating lutefisk,” added Owens. “For me, I started snowmobiling when I was 10. I love horsepower and engines. Anything that takes gas and oil piques my interest.”

Prinsen, 67, of Wyoming, has been snowmobiling since 1978. He says the sport has changed considerably since he straddled his first snowmobile, a 1971 Ski-Doo. “What I remember most about that ride is that I almost never went on another one,” he said with a laugh. “I just remember it being the most uncomfortable, bumpy, teeth-chattering experience you can imagine. But the quality and the advancements of today’s snowmobiles are truly remarkable. Even the evolution in clothing and other equipment like helmets make the sport so much more pleasurable than when I first started riding.”

Prinsen and others say the snowmobiles of yesteryear handled poorly and had very little suspension. Riders literally felt every bump in the road, so much so that some wore kidney belts and affixed rebar stakes to their skis for better traction.

“Let me give you an analogy,” Prinsen said. “It’s like going from a horse and buggy to riding a Cadillac, or from driving on a washboard gravel road to a freeway. It’s that stark.”

Prinsen speculates that the sport’s technological advancements and a well-maintained state trail system have brought more people into snowmobiling.