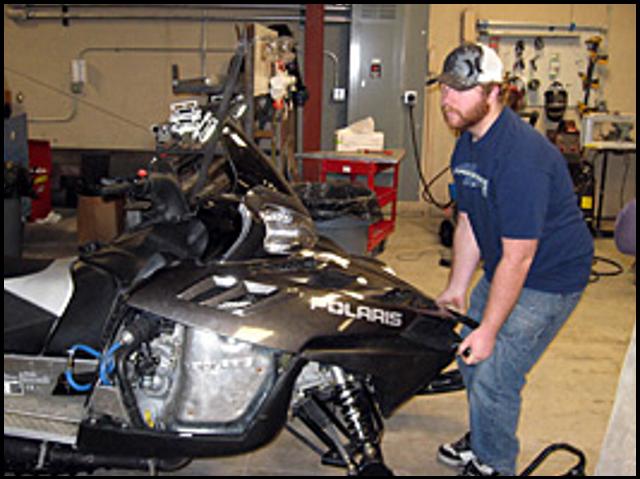 The challenge for engineering students is to reduce emissions and noise, and create a more environmentally friendly snowmobile.

"This is actually the fourth, or third exhaust configuration we’ve been working on," Schmidt said. "That’s the one we’re going to take to competition."

The exhaust system is important because the machine can’t exceed 78 decibels at full throttle, comparable to the sound of a dishwasher. But muffle the sound too much and you also reduce engine horsepower and performance. Schmidt said they have to reduce sound and emissions, without losing performance.

This is exactly the kind of job you might be given as a junior engineer working at a consultancy.

– Advisor Andy Blackmore"It gives us an opportunity to be presented with problems that are real world problems in the industry we’ll encounter as engineers. There’s all kinds of things we’ve applied like vibrations, thermodynamics, fluid dynamics, heat transfer," he said.

The snowmobile must run on an ethanol blend, something the typical snowmobile is not designed to do, but using ethanol is one way to reduce pollution. The change means modifying the fuel injection system. This week, the team arrived at the shop to find fuel dripping from the engine compartment — another problem to troubleshoot.

"We talk about things in class and it’s a lot of theoretical stuff and they can show us pictures and stuff like that, but when we get out here and actually work on the motors, you can see if you put more restriction on your exhaust you lose horsepower," Leier said. "It’s more of a hands on engineering experience."

NDSU’s clean snowmobile teamThe team wasn’t always sure they’d even make it to the competition. The first sled they built wouldn’t run, so they needed to build a second engine. Team member Michael Fegley said he’s learned a lot about managing a project on deadline.

"We have not had a running sled until the beginning of this semester," he said. "So we’ve actually only been working on this sled for three months. It’s been a big challenge getting a running snowmobile together. This whole semester we’ve been putting in about 40-50 hours a week just in the shop. That doesn’t count computer work and meetings."

And a full load of engineering classes.

Michael FegleyIt’s a big commitment of time and energy, but advisor Andy Blackmore said it will likely pay dividends next year when these students are looking for a job.

Blackmore spent 25 years working in the auto industry and he said the competition gives the students invaluable real life experience.

"This is exactly the kind of job you might be given as a junior engineer working at a consultancy," Blackmore said. "[A] customer comes to you and says, ‘Hey, we’ve got a problem, we need you to fix it.’ When I was hiring people, if I saw this on a resume, I’d put them toward the top of the pile."

This is the first NDSU team to enter the snowmobile challenge. There are also teams from the University of Minnesota Duluth and the South Dakota School of Mines.

Steve SchmidtTeam member Leier says he knows other universities spend a lot more time and money on their entries, but he’s still hoping to finish in the middle of the pack.

"There’s a lot of seasoned teams," Leier said. "Michigan Tech is the one that’s hosting it. University of Wisconsin is going to be there. University of Alaska-Fairbanks. Some big time engineering schools are there and it really does get very heated."