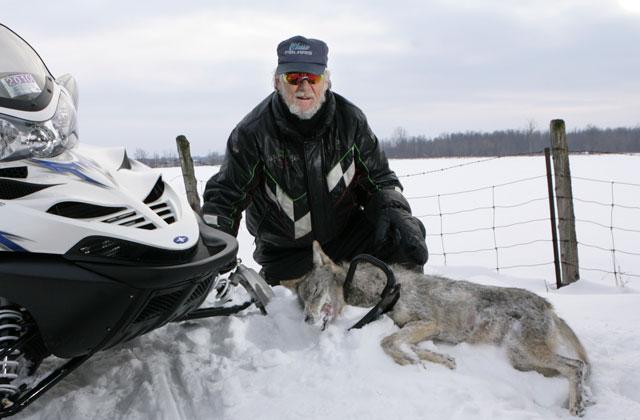 The 60-year-old retired contractor lives in Osgoode Township, where the animals are considered such a threat that the Osgoode Township Fish, Game and Conservation Club is sponsoring a “Great Coyote Cull Contest.”

The controversial contest encourages participants to bring in proof of coyote kills. For a $2 entry fee, a participant’s name will be put into a draw for a Mossberg 535 AP shotgun, worth about $550.

McGee was on a trail Sunday near the Winchester bog on his snowmobile when the coyote ran toward him.

“This animal made for the machine,” he recalls. “It attacked the snowmobile. You know, like a dog chases a car, same idea, only a lot more vicious. It was in attack mode, not with its tail between its legs. You should see the teeth on this thing.

“He tried to bite the ski. I swung towards it, nailed his front leg and broke his front legs and that’s why he couldn’t get away from me. I jumped off the machine and kicked him and destroyed him.”

It was about 2.30 p.m. and McGee was en route to his grandson’s hockey game in Winchester. He says the coyote weighs about 40 or 50 pounds.

“I didn’t know what was going to happen with this crazy animal. I was in full helmet, leather mitts and pants but the fear is still there. It’s almost like standing in front of someone pointing a gun at you and you don’t know if it’s got bullets in it. They’re a very scary animal.

“In the last three or four years I’ve had many encounters where I almost hit one or did hit one but never thought it was actually attacking. This is the first time. They used to run away from the machines.”

His daughter and 10-year-old grand-daughter were travelling behind him on a second snowmobile.

“When they came around corner, they (saw) me kicking and striking this coyote. Now they’re scared to go snowmobiling alone.”

After a struggle of about five minutes, he tied his scarf around the animal’s neck and towed it home.

“These animals are very vicious and we need to control them.”

McGee plans to enter the contest, which goes until March 15. “I have the most unique kill … so far,” he says. “I have no gun, no knife.”

Osgoode Coun. Doug Thompson included information about the contest in his weekly newsletter and has received about 20 critical e-mails about his decision.

“There’s a concern when you have coyotes running up and down the street in the middle of the afternoon,” he says. “When on a regular basis they’re killing cats and dogs and people are afraid to be out walking.”

Thompson says he’s heard about 100 reports of cats and dogs killed by coyotes in the last two years in Osgoode. And last fall a teenager was attacked while picking apples.

He has asked for help from the province but says he has been told it was a city responsibility. "It’s at a stalemate right now. Perhaps the city has to come forward with a formal request.”

Thompson said reports that coyotes were feasting on roadkill at a city operations depot on Scrivens Drive was exaggerated. He said the animals are usually buried but on weekends might be out in the open.

He said he was going to ask city staff to review policy for disposing of roadkill animals throughout the city.

On Jan. 27, Thompson plans to attend a meeting in Aurora on “human-wildlife conflict strategy” which will deal specifically with coyotes. The meeting will include government officials, trappers, hunters and animal rights groups.

“We spoke to the Ministry of Natural Resources. They don’t have numbers. We are unable to find evidence to support it. We haven’t had a lot of of complaints about cats and dogs. It has been a handful. It’s difficult to demonstrate if it’s coyotes or not,” he says.

“The way it’s been framed is somewhat offensive,” adds Roney. “It may draw those into the activity that may not be as responsible and make sure everything is done in a humane fashion. Trivializing the activity and making it seem a bit of a wild west show.”

Mike Blaney, a member of the executive of the Osgoode Township Fish, Game and Conservation Club, says the club expects about 100 entries in the contest.

Blaney notes that the hunt is legal and hunters have to be licensed. Coyotes have been killing livestock such as sheep and calves, as well as cats and dogs in the area. Last year, farmers made 146 claims for provincial compensation, averaging about $200 each, for farm animals killed by wild animals.

“They’ve gotten used to living off man’s garbage and living in close quarters. They’re learning not to be afraid of people.”

Blaney acknowledges that a cull is not completely effective because coyotes re-establish themselves quickly.

“The hope is that you eliminate problem animals who come into the farm yard.”

He said that neither the City of Ottawa nor the province seem willing to help reduce the coyote population.

“We are the only ones making any kind of a move to help the situation.”