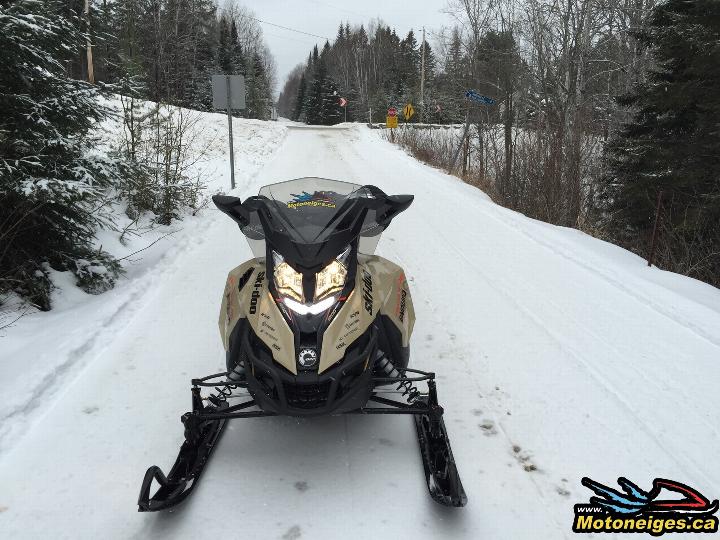 Since I practice snowmobiling, I have piloted many types of machines and for the last few years, I piloted Touring snowmobiles, mostly for their comfort. I could not wait to try out the brand new 2016 Ski-Doo Renegade Enduro in the crossover category, but with great comfort. Our trial machine is equipped with the 1200 4-TEC engine with iTC. As I am writing this article, the odometer indicates 2 500 km on this Renegade Enduro equipped with Air Ride shock.

The Renegade Enduro is designed for fans of long distance Touring solo type of riding, but who also like to play off-trail some times or to ride on trail after important snowfall and before the grooming machine. Since 2009, I ride a 1200 Grand Touring SE with air suspension, so I was already acquainted with it. However, I noticed some differences that pleased me.

First, I liked the wireless electronic throttle called iTC (intelligent Throttle Control). It is remarkably soft for your thumb and also, it can be rotated to pilot with fingers instead of the thumb. The progressiveness of the lever differs a lot from a traditional throttle with cable; the response is quicker mostly in Sport mode, about which I am going to talk below. Besides, those who rode a BRP 1200 cc model of the past years, know that when you release the throttle, you get a compression effect that slows down the snowmobile; I used this often to slow down before a curve or to stop at an intersection. With the iTC system, such effect does not exist; so, it took me a while to get used to it. You have to release the throttle earlier. On the first occasions, I used brakes more than usual. Once familiar with its reaction, it is just great, as precise as a traditional throttle. The iTC system offers three levels of performance thanks to the electronically controlled intake throttle body that receives its data from the wireless throttle. In Sport mode, meaning at full available power, accelerations are very honourable and pick-ups are without any hesitation. In Standard mode, accelerations are a bit less strong and more linear. In short, you must push a little harder on the throttle to get the same accelerations than in Sport mode. Personally, I prefer the Standard mode. Besides, I noticed a difference of fuel consumption. In Sport mode, fuel consumption is higher by 10 % to 15 % than in Standard mode, depending on trail conditions. The ECO mode offers reduced consumption and performance of the snowmobile. I did not try this mode.

In matter of fuel consumption, the BRP 1200 4-TEC engines can operate with an octane rating of 87 but BRP does not recommend it if there is ethanol in the fuel. The engines will operate but it is not recommended on long term. In the Premium gas, there is no ethanol and in New Brunswick, one of the regions where I went snowmobiling, gas stations offer Regular gas with no ethanol. So, I have been able to compare the difference of performance on the snowmobile. In fact, I did not really experience any difference of performance but I saw a reduction of 10 % of fuel consumption with the Premium gas. 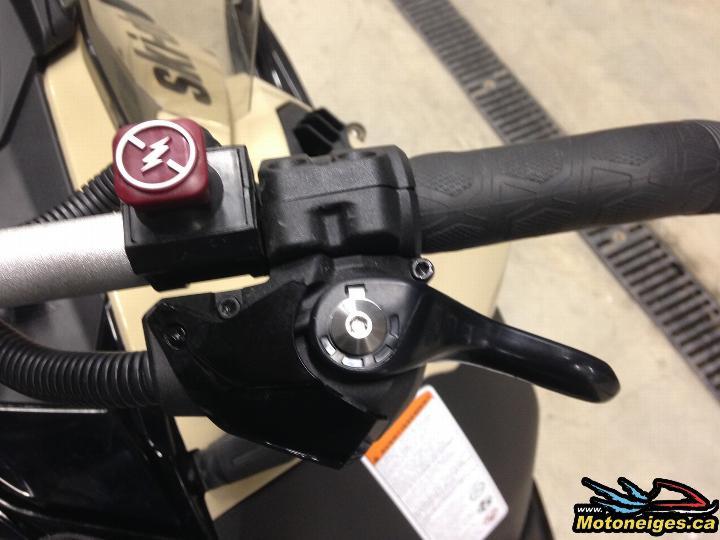 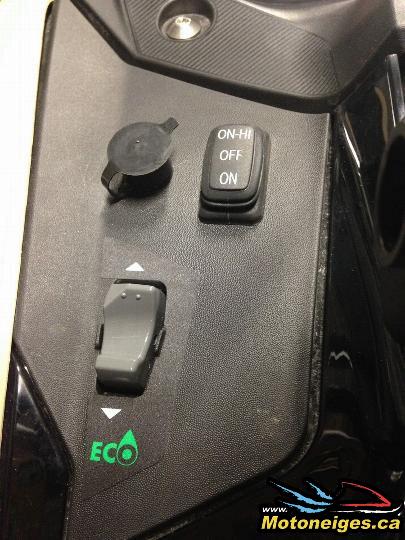 The throttle and the switch that controls the 3 riding modes

Second, for 2016, 1200 cc engines are back with the eDrive 2 drive clutch and it seemed to be well calibrated with the driven clutch. Then, the muffler has been reduced by 38 % to fit into the REV-XS chassis, which produces a more enjoyable sound all while complying with environmental standards. Besides, from a certain speed, the track rolling is louder than the engine.

Third, I noticed a pleasant difference in the riding position compared with the Grand Touring. We are seated higher, at a certain angle, the seat is wide and very comfortable, its material is quite gripping to keep us at the right position and it allows us to move quicker on the seat in more aggressive type of riding or to absorb an inevitable bump easier. Besides, the finishing of the seat is great, with the word Enduro embroidered in it. However, snow sticks to the seat and it is hard to remove it. Since I played in powder snow, my pant became wet because my body heat made the snow melt. But moisture did not penetrate my pant because it has a waterproof breathable membrane. I must say that even those who had ordinary seat also got their pant wet. 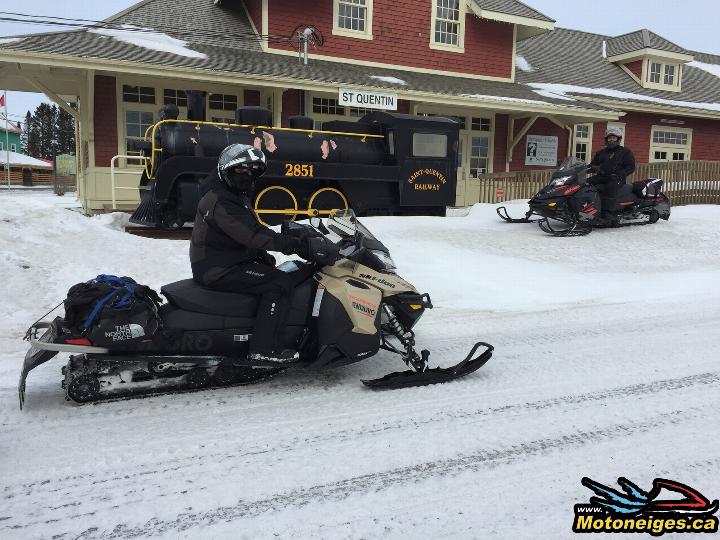 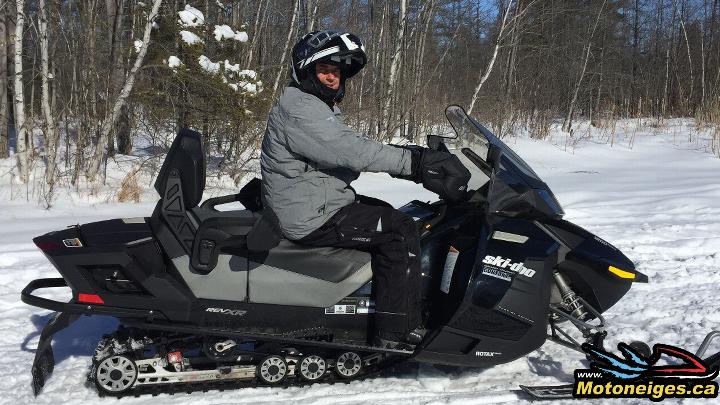 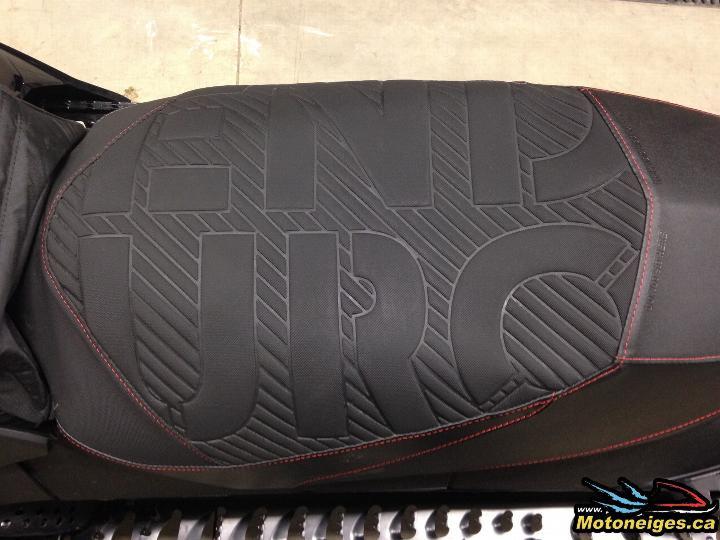 Enduro embroidered in the seat 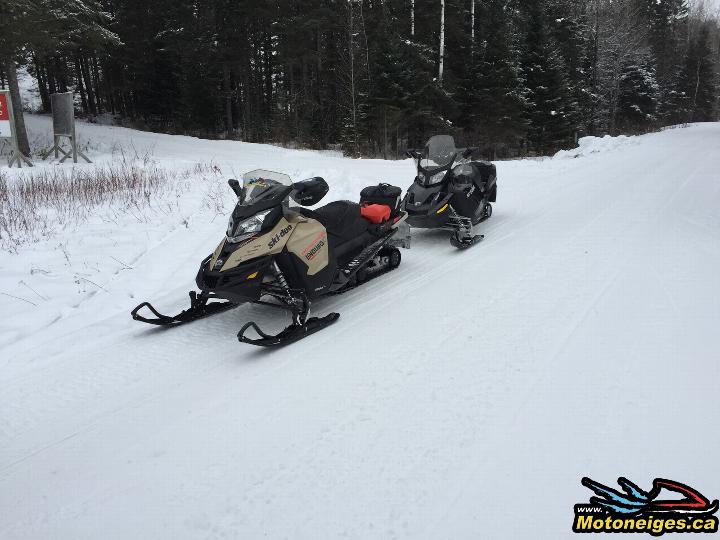 Fifth, the controls to operate the snowmobile equipments are located elsewhere than on previous models. The hand and thumb warmers switches are easy to reach and we can read their temperature level setting on the multifunction gauge. Concerning the adjustment of the suspension, we must slightly move the hand to reach the switch located on top of the handle that operates the adjustment and then, we make the adjustments with the hand warmer control. I prefered to adjust my suspension when the machine was stopped so that I could concentrate on my riding. I liked how it was settled because all was logical. However, if the high beam switch was located a little more on the right, it would prevent it from touching the thumb. 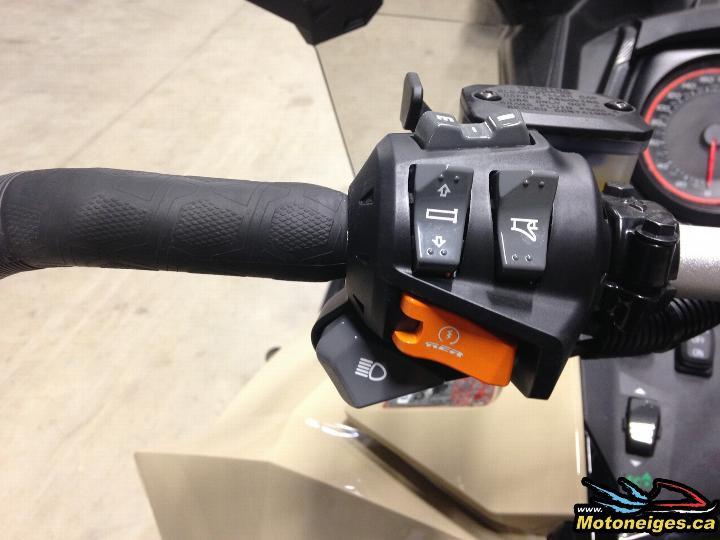 Légende   Switches to control the heated thumb and grips, on top to control data displayed on the gauge and to adjust the air suspension, the orange switch to start the engine and below this one, the switch to control lights intensity

Mirrors are great, strongly fixed to the deflectors on each side of the windshield. No vibration. They provide excellent lateral vision and moreover, they are adjustable. 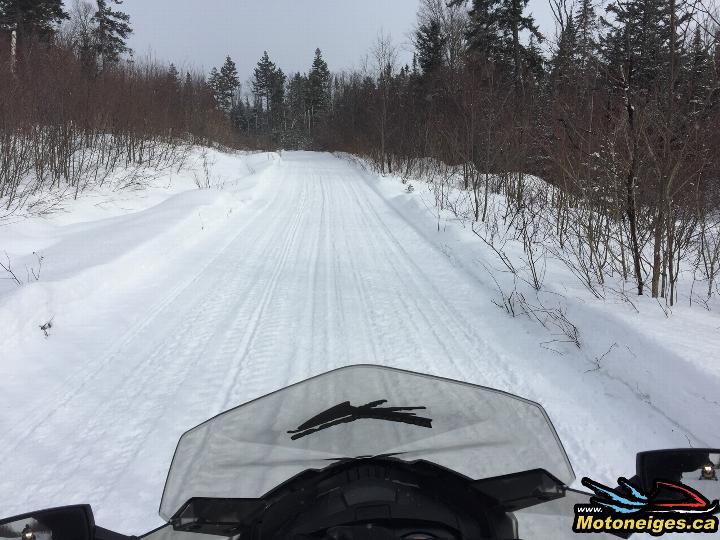 Rear view from the mirrors

Sixth, since I already piloted a Grand Touring SE with rMotion suspension and air suspension, I was eager to experience this suspension on the Enduro. And it performed better. The Enduro is lighter than the Grand Touring by 75 lbs/19,4  kg and it made a difference. I got into bumps less deeply. I rode really comfortably. The front suspension is equipped with adjustable HPG PLUS shocks coupled to the RAS 2, which allowed me to correctly calibrate the front end so that skis stick to the ground. I tested it in very unveven terrain conditions and I really liked it. Above all, we must keep in mind that this is a trail snowmobile that lets us enjoy off-trail riding. 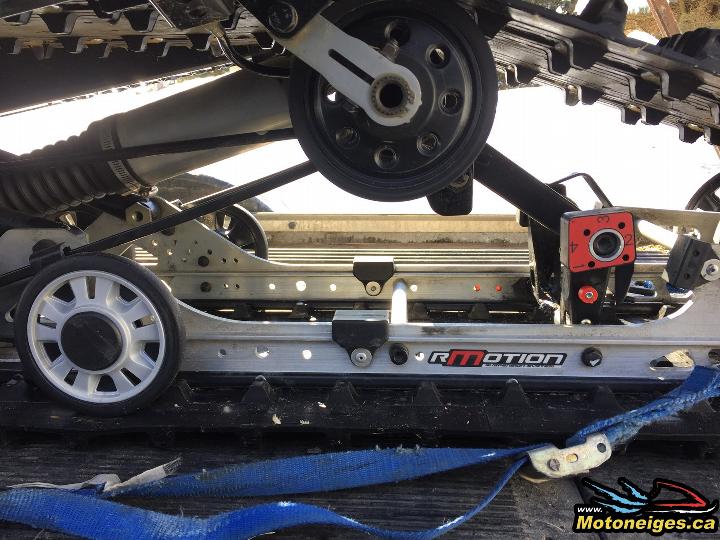 Seventh, I wanted to try out the Pilot TS skis with adjustable runner depth accordingly to trail conditions. And I tested them in all conditions. I noticed that in deep powder snow or on slushy trail where other snowmobiles were under-steering, I was able to find the proper calibration to really stick to the ground. It was very easy to adjust. It was funny to see other snowmobiles understeering while mine was sticking to the trail. On hardened trail, I had to keep the setting close to minimal to avoid darting. I did not experience too much darting, just a bit. I was still comfortable, it was not annoying and I am used to ride with a snowmobile of zero darting. I would like to add that steering effort is a little more intense, mostly if the runners are at the lowest setting; we get used to it, but we can feel the effort required. 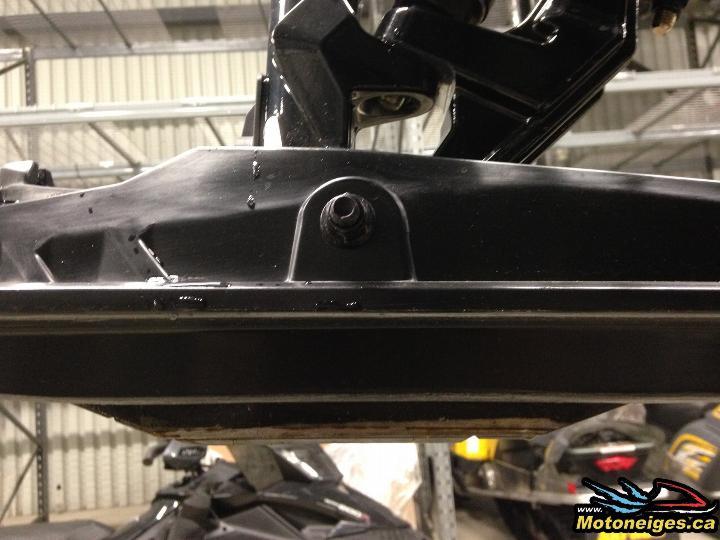 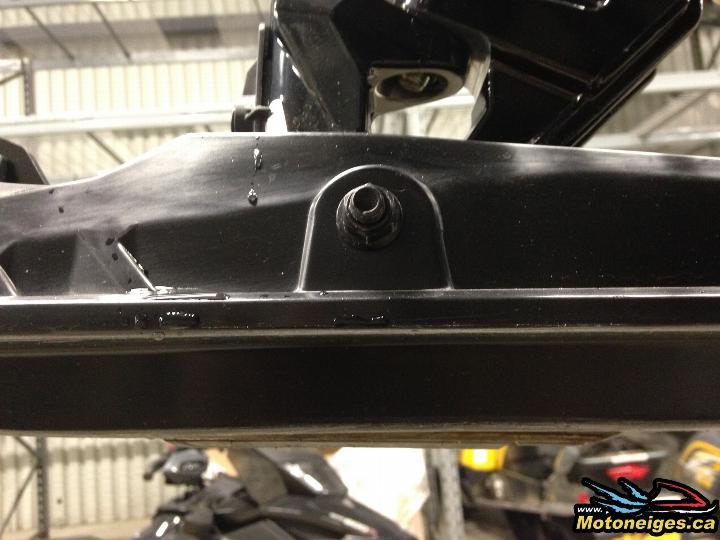 In short, I told you about the differences I noticed compared with previous models, all differences that enhanced my snowmobiling pleasure. I am a new fan of the Renegade Enduro. If you ride 1-up and some times with a passenger, you can install a dual seat with backrest and all LinQ accessories are available for the Enduro. I rode in snow storms, in powder snow and not any snow flurry came on the gauge to cover it. During my trial, the electronic reverse did not function. After checking with the dealer, I learned that there was a service bulletin in this matter and the problem has been solved very quickly. BRP had installed auxiliary LED lights on this snowmobile and they really provide great vision on the trail right in front of the machine. And the XC bumper offers a nice look to this snowmobile.

Special thanks to BRP, our partner in this long-term trial who let me try out this wonderful snowmobile. 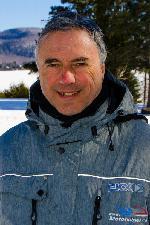 Daniel has a passion for snowmobile. He was raised close to St-Damien de Brandon, in the snowmobile heaven. When he started, there were no trails so he was riding in the fields and on the lake. We must say that he began to ride a snowmobile in 1967; he was using his friends’ machines, such as a 1964 Ski-Doo, a 1966 Ski-Doo, a Snow-Cruiser and an Alouette that made more noise than it was moving. Daniel bought his first snowmobile in 1972, a 1972 TNT 340 Bombardier with a fantastic 60 MPH. From St-Damien to La Glacière, he had to ride about 44 km (28 miles); it was taking him a long time and often, the machine was breaking down along the way. So, the program Mechanics 101 was a must. The Mastigouche and Mont-Tremblant National Parks have been his playgrounds during many years. Daniel rode all across the province. He likes to visit the regions and meet their residents. In 1994, his friends asked him to organize expeditions so they could also discover our beautiful province and since that time, Daniel organizes excursions and brings along with him other snowmobile fans or novice snowmobilers.
Toutes les publications
PrevPrécédentMorin, Poirier split Pro finals in Bennington for East Coast Snocross
Suivant2016 Polaris 800 PRO-RMK 155 : pre-ride analysisNext