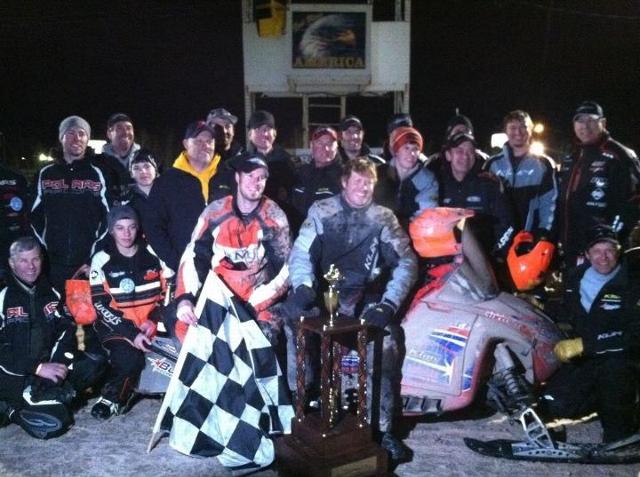 The Bunke Racing team of Gabe Bunke, Aaron Christensen and Bobby Menne IV used Polaris Terrain Domination to outrun the field and win the grueling International 500 on the famous Soo I-500 track in Sault Ste. Marine, Michigan, on Feb. 4. Unseasonably warm weather led to severe deterioration of the ice oval, but Polaris performance and reliability put five Polaris race teams in the top 10, and 10 Polaris teams finished among the top 22.

Polaris racers Corey Davidson and Travis Hjelle (XLT Engineering/Stud Boy), who have won the I-500 twice, including in 2011, finished third.

The Bunke Racing drivers drove hard and consistently, using their IQ Race Sled’s Polaris Liberty power to pull away from the competition repeatedly in the final 100 laps, when several yellow flags erased the team’s leads. The Polaris sleds displayed exceptional durability as the ice melted and wore away in the corners, allowing dirt and mud to show through by the end of the 500-lap race.

Bunke Racing completed the 500-mile race in 9 hours, 24 minutes and 36 seconds, and they won by 16.475 seconds, a margin that would have been much larger if not for the numerous late caution flags.

Bunke and Christensen finished fourth in the I-500 in 2011. Bunke won at the Soo in 2005 as the lead driver and in 2002 as a teammate with Mike Gentz, Jr. Bunke, Christensen and Menne are all top drivers on the United States Cross Country circuit, so they usually race on rough terrain but were completely at home on the flat Soo oval.

"I think this one is the sweetest," Bunke, age 35, told the Sault Star newspaper after the race. "We worked so hard for this… These might have been the toughest conditions I’ve raced in. You just had to try to drive safely and stay out of trouble."

"This makes up for letting a lead get away last year," said Christensen, age 30. "This feels really good."

Davidson isn’t through pursuing his ninth victory at the Soo. "I’ll get it. I’ll be back here," he said after the race.

Other Polaris race teams that finished in the top 10 were: a second Bunke Racing comprised of Ryan Faust, Scott Macaig and Travis Faust, who finished seventh with 483 laps; the R&R Racing team of Tyler Nickles, Rodney Bell and Josh Ware, who were eighth (481 laps); and the Wuppet Race Team of John Bosek, Cameron Rittenour and Ryan Flynn, who were ninth (481).

Polaris race teams that also finished in the top 22 spots were: