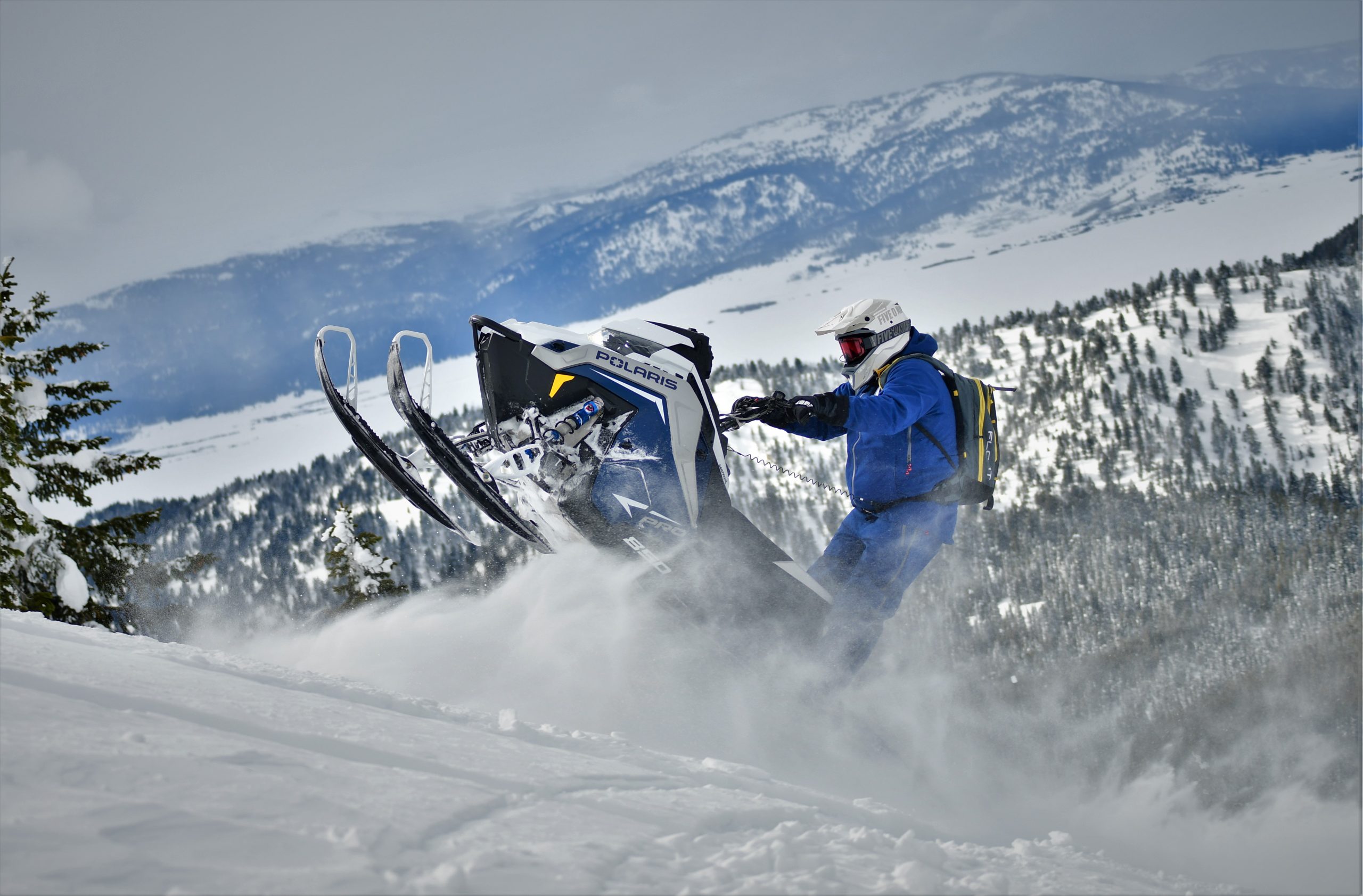 Polaris came out in force with its 2022 mountain range. It introduced the Matryx chassis, with a completely new design. Last year, the Matryx platform was introduced on some of their trail snowmobiles and we were all hoping to see it on mountain snowmobiles this year. If a complete chassis change for mountain snowmobiles wasn’t big enough news, Polaris dropped another bomb with the introduction of the Patriot Boost 850, a turbocharged version of their 850 Patriot engine for the RMK and Khaos models. To top it off, they also refined their tunnel and cooling system by introducing the Slash models. I was able to get my hands on a few of Polaris’ new mountain models and test out this next level of technology where it is put to good use: the mountains. 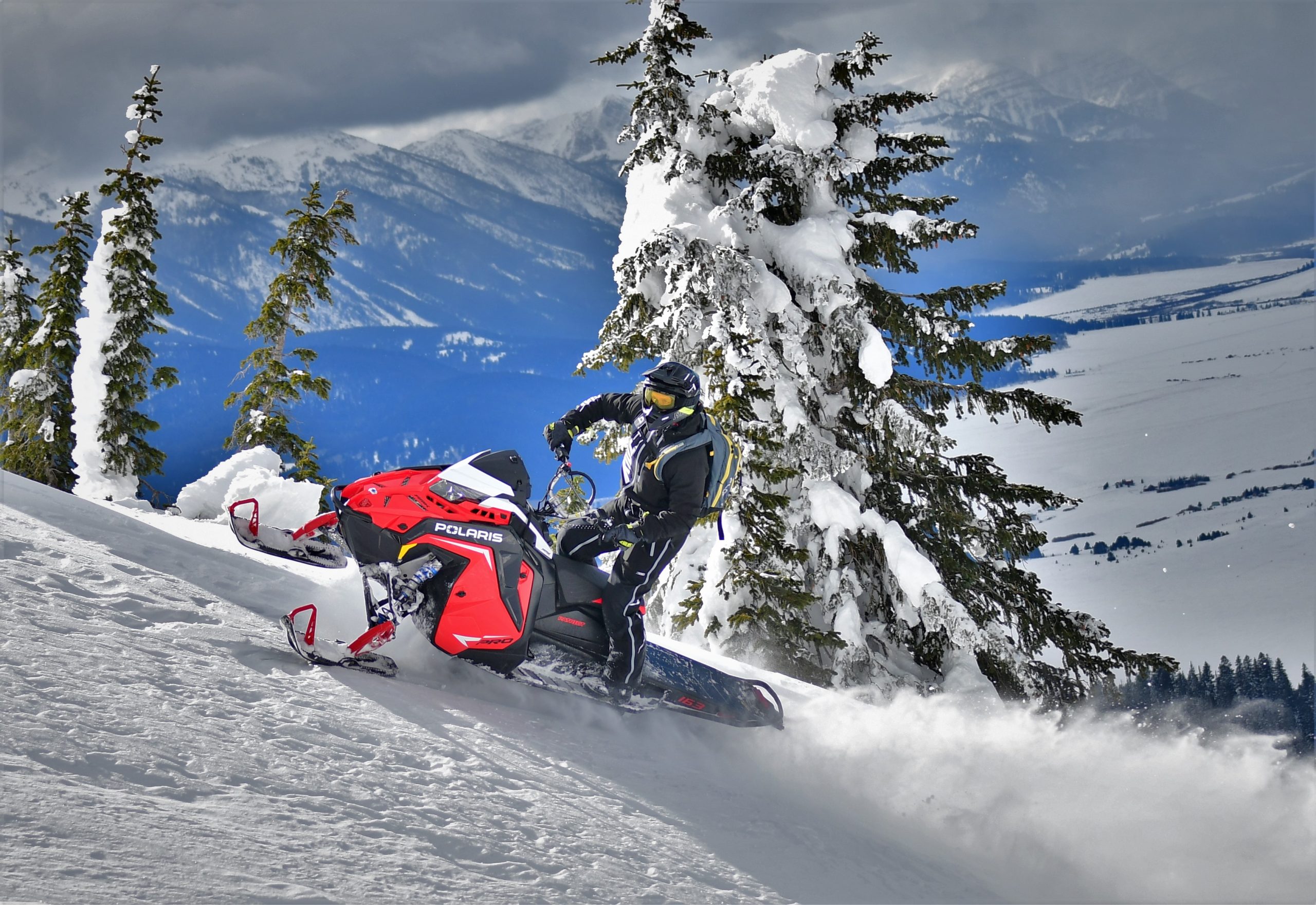 The Matryx platform in the Polaris mountain line not only gives its snowmobiles an aggressive fighter aircraft look and attitude, but it also has advanced design and engineering features. The Matryx platform features a snocross-inspired riding area to improve the rider’s connection and experience with the snowmobile and reduce effort while riding. The seat, fuel tank, control console, footwells and body side panels are all narrower, giving the rider more freedom of movement. The Axys platform RMK was designed to be a technical weapon for off-roading and it was. With the Matryx platform, none of that technical performance has been lost with the new chassis. In fact, they’ve been enhanced with a slightly higher platform. With the Matryx RMK platform, there is more clearance, which reduces friction and helps to get the sled on top of the snow and keep it there.

The Patriot 850 engine was designed and intended from the start to have a turbocharger, which comes in the form of the Patriot 850 Boost. Polaris and its engineers had the original 850 turbo in the works for years. However, they didn’t just stick a turbo on an engine they already had. This engine was specifically designed for a turbo several years ago. Since the engine was designed to be turbocharged, it has some interesting features such as a vertical turbo with a notched, counter rotating turbine. This design reduces weight and improves airflow, delivering fast and smooth power.

My 2023 predictions for Polaris! 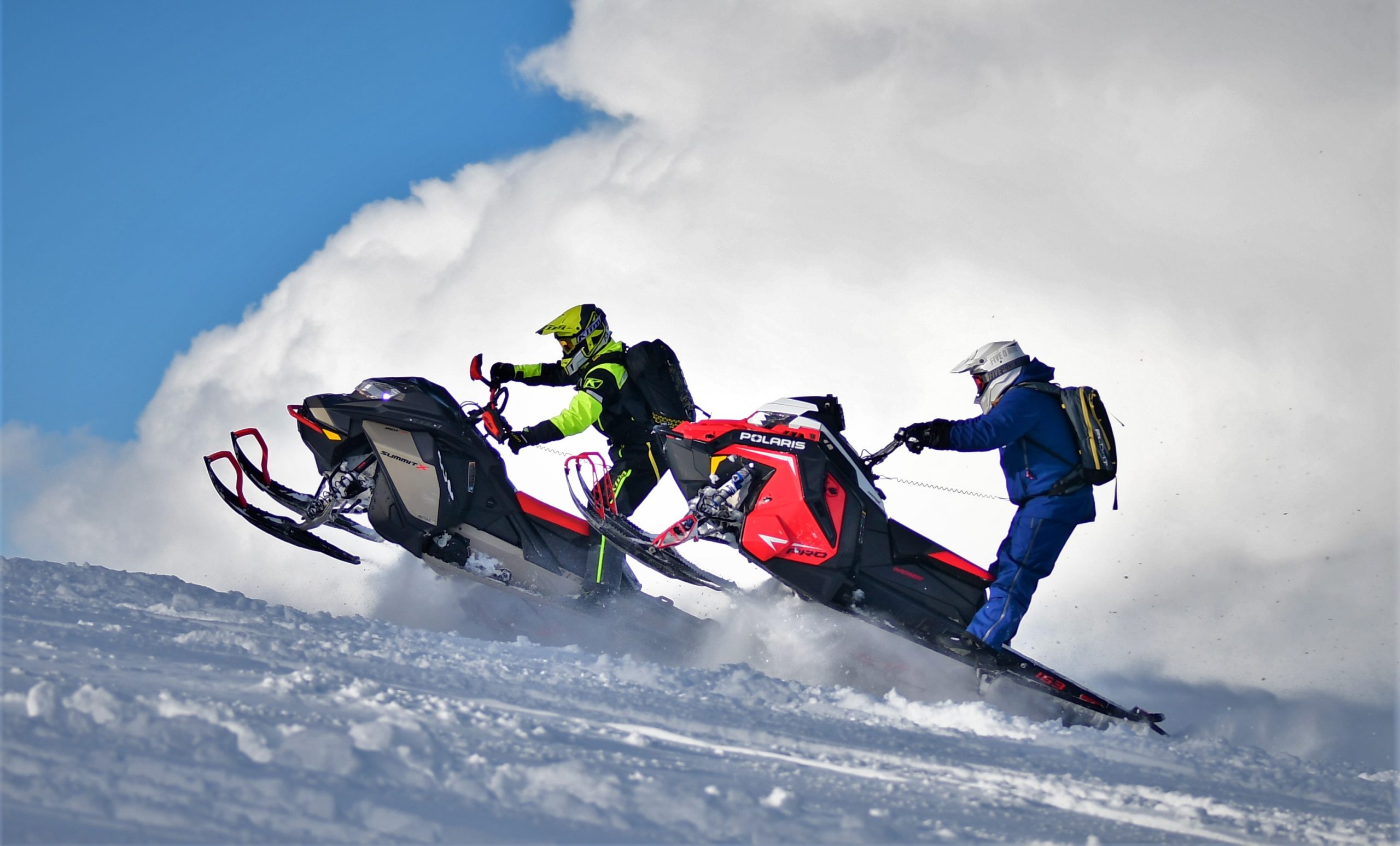 The SmartBoost system – with its layout and design integrated into a compact, narrow package – minimizes power lag. By reducing thrust lag, Polaris was also able to smooth out the delivery of propulsion and prevent the power surge from hitting too hard.

Ever since two-stroke mountain snowmobiles started getting aftermarket turbos, lag has been an issue. The first few days of riding a mountain snowmobile with a used turbo were a lot like flipping a switch. You either had no power, or you had all the power at once, which made the machine difficult to control. Riding a snowmobile with that kind of power isn’t a problem if you’re in a wide open expanse or meadow, but if you’re on a steep, technical climb or in tight trees where many of us like to go, turbos make it harder to ride.

Not so with the Patriot Boost. Its power is impressive and feels like a standard 850 until you need more performance. It has a very linear power curve for maximum control, while giving you a lot more power when you want it. I tested the snowmobiles at an altitude of about 9000 feet (2743 meters) and the difference between the 850 Patriot and the 850 Patriot Boost was huge. Polaris claims that at sea level, the power increase with the turbo is 10% more than the 850, but at 10,000 feet, the Boost version makes 50% more power. Yes, that’s not a misprint, the Patriot Boost has 50% more power than the Patriot 850 engine at 10,000 feet! 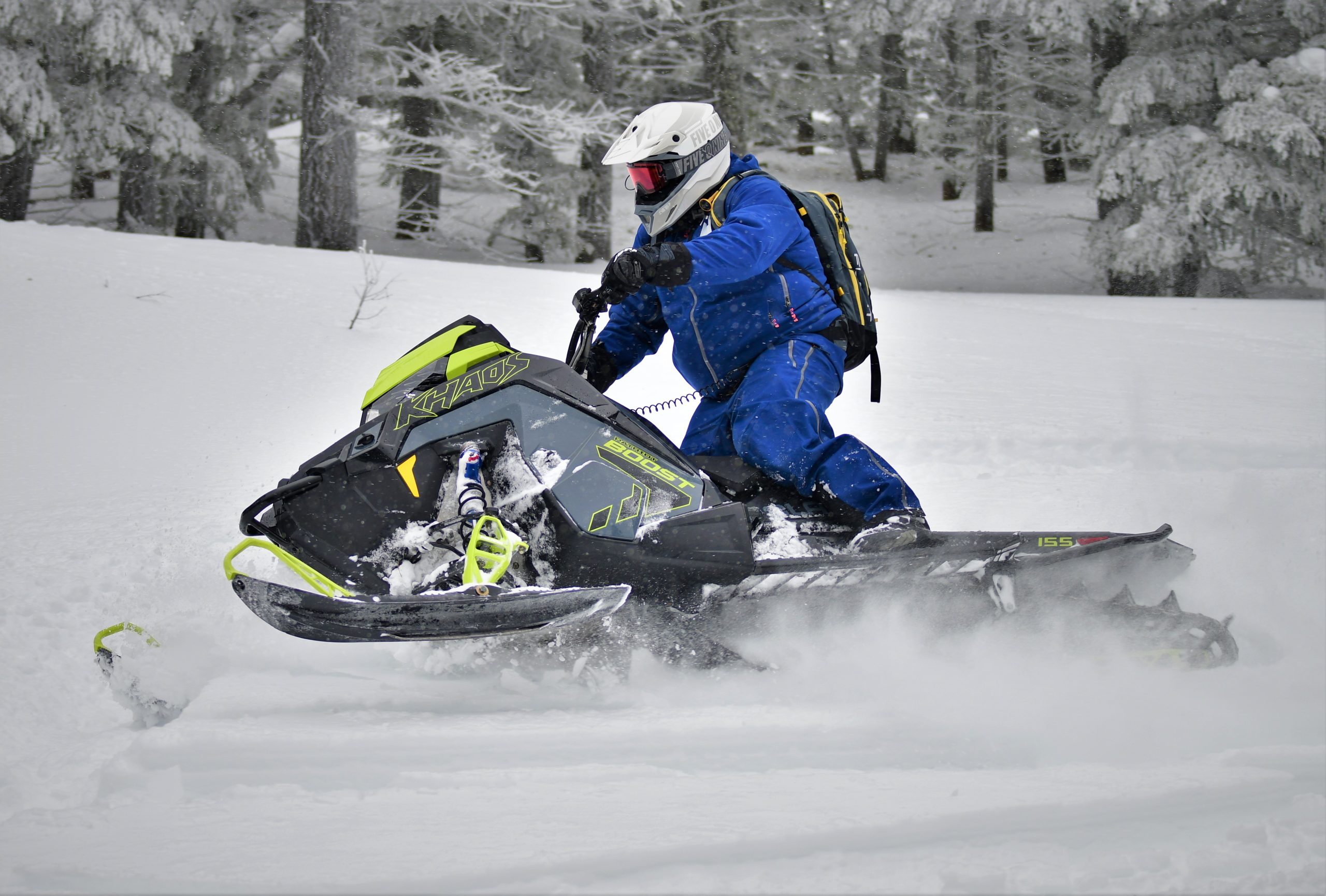 Taking the 850 and 850 Boost models over the same steep terrain, the difference in power is huge. The original 850 handled well and climbed the steep terrain, but I had to keep it at maximum and make more side turns to make the climb. The same slope with the Patriot Boost was much easier; I even had to drop some speed to stay on top. The difference in power between these two snowmobiles was insane and impressive. The Patriot Boost made a remarkable 9 psi of power. The early years of turbos on mountain snowmobiles were not very appealing to the type of riding I like with their performance and handling. Now, with crisp, smooth power delivery, very little lag and 50% more power than the stock 850 engine at 10,000 feet, how could I not buy one?

Slash: What it means

When Polaris adds Slash to one of its snowmobiles, it’s about modifications to the tunnel. First, Polaris shortened the tunnel. Then, it added a thinning at the end, which helps reduce weight and drag. Anytime you can reduce drag, especially on a mountain snowmobile, performance is dramatically improved and it shows on tougher days on the trails. In addition to the modified tunnel, Polaris also changed the cooling system to be more centralized, no longer exiting at the fuel tank on the tunnel. This reduces weight in two ways: the cooling fluid capacity is reduced, and the weight of the cooling system is more centralized in the center of the snowmobile, which reduces snow and ice build-up on the tunnel. So the combination of a shorter, tapered tunnel, reduced weight due to the cooling system changes, and less snow and ice build-up results in a lighter, more maneuverable snowmobile. Polaris says the Matryx Slash is 22% lighter in the snow, which helps the rider with increased control and reduced fatigue. 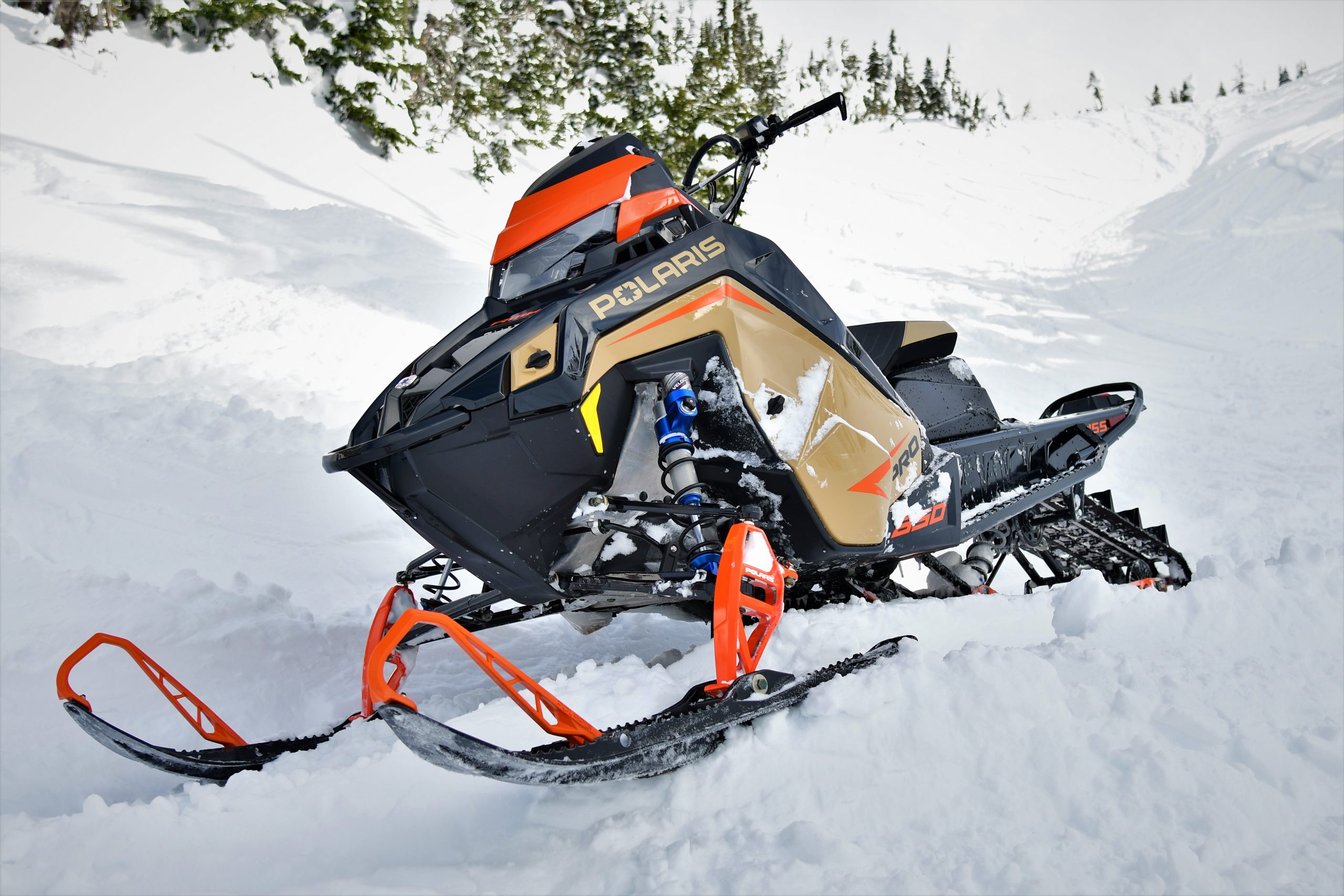 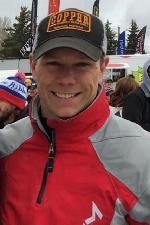 Jim’s passion for snowmobiling started at age 14, when he got his first job, strictly for the purpose of buying his first snowmobile. He grew up in a hunting and fishing family which gave him lots of opportunities to ride from a young age. This whet his appetite for the snow, the adrenaline and the sport of sledding. His passion and NEED for snowmobiling have grown to a minor obsession over the years… do they have meetings for that? This passion for sledding led him to base his career on it. Jim is an Off-Highway Vehicle/Backcountry Snowmobile Ranger for Custer Gallatin National Forest. He resides in West Yellowstone Montana which some say is the snowmobile capital of the world. In between teaching avalanche classes to both guides and casual riders, Jim also guides snowmobile tours in the winter and brings his groups to the remote and untouched areas of the mountains and also gets out sledding with friends whenever possible. When you consider his riding begins in November and goes through May, you can imagine how many days he spends on a sled. Jim feels fortunate to have the ability to support his sledding passion with his career and his affiliations in the snowmobiling community. This has allowed him to experience some of the best riding in the world and get as many days on a sled as he can. There is no doubt one could say with certainty that Jim is a full-blown snowmobile enthusiast.
Toutes les publications
PrevPrécédentCollaborative text: How do you wear your helmet?
SuivantReview: 509 Freeride Gloves Next